These “Boring” 7.2% Dividends Demolished the Market (Plenty More Upside Ahead)

There are three funds hiding in plain sight that do something everyone thinks is impossible: pay huge dividends—with yields up to 7.2%—and deliver outsized 24%+ total returns, too.

I know I don’t have to tell you what an inflation-fighting weapon a return like that would be these days.

These are no less than the world’s three best-performing closed-end funds (CEFs) over the long term, and today we’re going to rank them from third to first to see if any (or all!) of them have a place in our investment portfolios.

The least impressive CEF on the list, the Columbia Seligman Premium Technology Growth Fund (STK), has “only” a 23.7% annualized return, based on its market price, over the last five years, with a dividend that’s held steady throughout that time (and yields 5.1% today). Meantime, STK’s underlying portfolio, or net asset value (NAV), has ballooned.

(CEF investors will know that when measuring these funds’ performance, we need to look at two numbers—the NAV return and that posted by the fund’s market price, which is the return we get. Due to a quirk in CEFs’ design, these figures can be very different.) 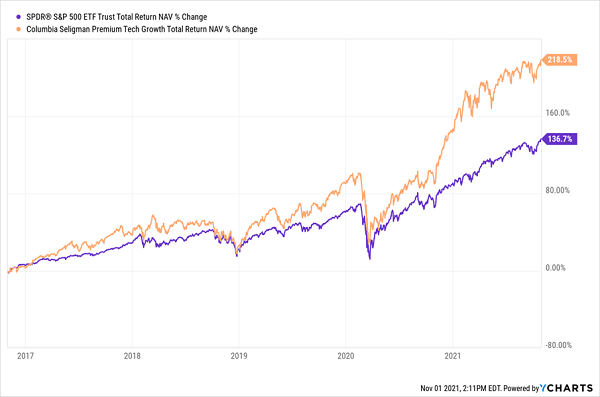 The stellar performance of STK’s holdings is due to the fact that they’re a mix of smaller tech companies, like Lam Research (LRCX), Teradyne (TER) and Synpatics (SYNA), combined with big, cash-rich tech stalwarts like Apple (AAPL), Alphabet (GOOGL) and Microsoft (MSFT).

STK has held a consistent dividend over the long haul, while the Liberty All-Star Growth Fund (ASG) has increased payouts over the last decade, which is why it now yields an impressive 7.2%. And that huge payout is sustainable—the fund’s high-octane portfolio has backed it up with an incredible five-year run, posting a total NAV return of 198.3% in that time: 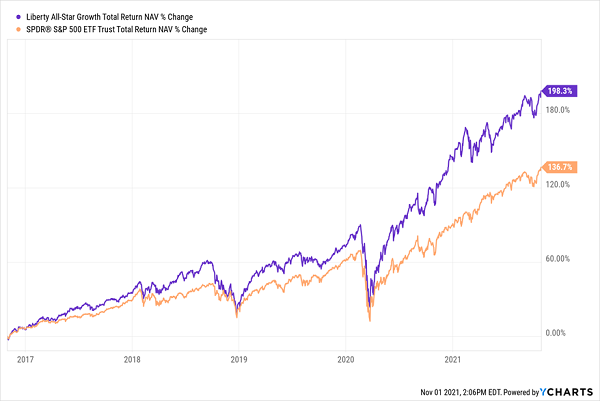 Meantime, ASG’s market price has outrun its NAV, with a 247.1% return. In other words, ASG investors who bought in five years ago have now banked a $247,100 profit for every $100K invested.

Similar to STK, ASG focuses on companies that are seeing soaring revenue but unlike STK, ASG doesn’t stick just to tech, instead aiming for growth stocks across sectors.

That’s why ASG holds stocks as different as Signature Bank (SBNY), education services firm Chegg (CHGG) and insurer UnitedHealth Group (UNH). The result has been a massive market-beating return and a high income stream that keeps on rising.

The CEF with the all-time best market performance (going by its market price) is also our most appealing buy of this trio today: the BlackRock Science and Technology Trust (BST).

BST Nearly Triples Up the Market 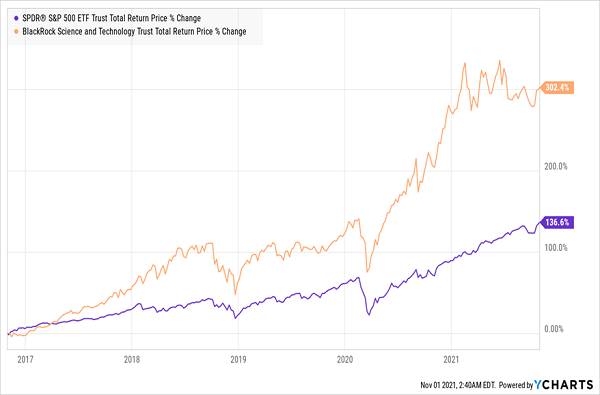 With a 31% annualized return over the last five years, this relatively new (launched in 2014) fund has stayed under the radar for many investors. For those in the know, however, a $100K investment has returned $302,400 in profits in the last half-decade, with BST’s payouts steadily increasing in the last few years, along with its ballooning portfolio. 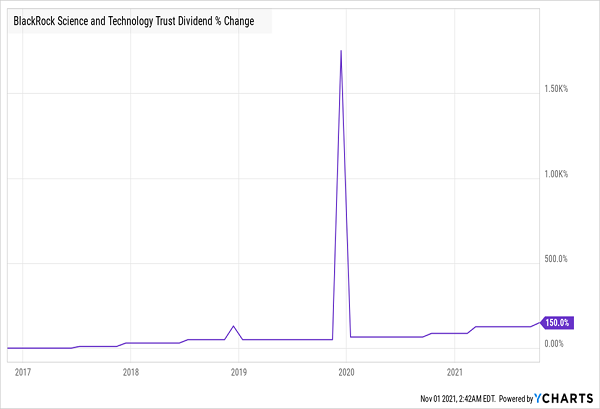 All of this makes for a great CEF, and that’s why BST should be on the top of your “buy now” list. But there’s another reason this fund is a great deal: unlike ASG and STK, which trade for premiums to NAV—CEF-speak for saying these funds trade above what their portfolios are actually worth—BST trades for less than its portfolio’s real value.

Right now, BST’s market price is 4.7% below NAV, meaning you get its holdings, which include Amazon.com (AMZN), PayPal (PYPL) and Alphabet (GOOGL), as well as a few private-equity firms BlackRock has access to (but your average investor doesn’t) for less than these companies’ real market value.

For that reason, BST is our No. 1 pick of these three now—especially since it will also give you a 5.5% income stream that’s likely to keep rising while you hold it.

Yours Now: Instant Access to My 16-Fund CEF Portfolio (Huge Yields Up to 8.1%)

These three are just a taste of the huge dividends (and gains!) available in the CEF market. But they’re far from the best picks. That’s because their strong performances have drawn a lot of attention, which has made them all less of a bargain than they once were. That makes a repeat of their stellar performances less likely in the next few years.

But that’s not the case for the 16 buy recommendations in our CEF Insider portfolio. They still boast plenty of upside (even in this pricey market!) and an average yield of 6.9%. (The highest payer of the bunch yields an outsized 8.1%.)

These 16 funds are the answer to safeguarding your portfolio and funding the retirement you want. Best of all, 12 of these high-yielding funds pay dividends monthly, so your income will perfectly line up with your bills!

And now you can dip a toe into this potent collection of income plays with no risk and no obligation whatsoever!

That’s not all—I’ll also give you a FREE special report outlining my top 5 CEFs to buy now. These 5 CEFs boast huge dividends up to 7.9%, plus incredible discounts, too. In fact, they’re so cheap I’m calling for 20%+ price upside from each of them in the next 12 months!

This complete wealth-building package is waiting for you now. Click here to get your 60-day trial to CEF Insider and your FREE report revealing the top 5 CEFs to buy for big dividends up to 7.9%, plus 20% price upside, too!