These 7%-12% Dividends Are in the Bargain Bin

Mid-cap dividend stocks are the best bargain on the board right now. I love them because lame income investors don’t consider them. They fixate on:

Meanwhile many great under-the-radar mid-cap stocks sit between $2 billion and $10 billion in market capitalization. They sit in a “sweet spot” that accommodates dividend safety and growth.

Which is why they generate big returns.

It’s easy to overlook these names—the media doesn’t talk about them as much, and they tend to have far less analyst coverage than the Apples (AAPL) and Microsofts (MSFT) of the world. But that information void is exactly how we can reap deep discounts in this mid-sized space.

Let’s talk about five mid-caps that are trading on the cheap. I’m talking about single-digit price-to-earnings (P/E) ratios with generous yields between 7.2% and 15.3% as I write (and no, that’s not a typo).

Unlike many financial stocks with outsized yields, NYCB is just a regular, run-of-the-mill bank. It has nearly $60 billion in assets across a wide array of traditional offerings, such as checking and savings accounts, mortgages, business accounts, commercial lending and more.

However, NYCB is trading for cheap—and delivering an even fatter yield than normal—because of a roughly 30% decline from its 2022 highs that’s well worse than its contemporaries.

Why Is New York Community Bancorp Getting Crushed? 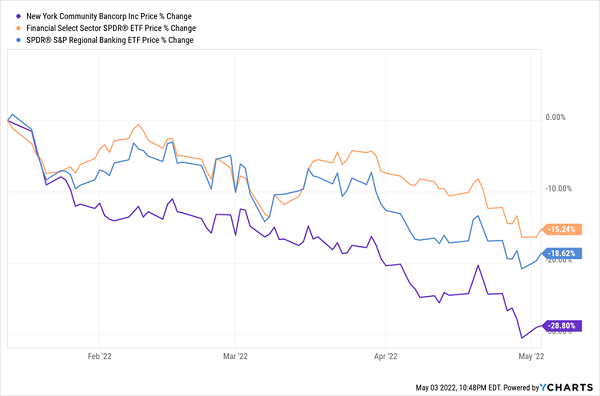 Part of it is just NYCB being carried along for the financial-sector ride lower. Part of it was recently reported quarterly results that were merely in line with estimates. But also weighing on shares is an extension of a merger with Michigan-headquartered Flagstar Bancorp (FBC), which would see the deal likely close in the second half of 2022, and the announcement that the new combined company would need the blessing of both the Fed and the Office of the Comptroller of the Currency—and the latter isn’t a slam-dunk. And even if it does, Flagstar, which depends heavily on its mortgage business, has its own struggles, as evidenced by a wide quarterly miss.

The sweet dividend looks safe, M&A or not. But whether NYCB can actually turn its value into additional upside is something of a gamble that hinges on both successfully merging with Flagstar, and Flagstar carrying its weight.

Another high-yielding financial worth a look is Old Republic International (ORI)—a general- and title-insurance provider whose decent headline yield belies a far larger chunk of change being tossed to investors.

But what really makes Old Republic International is that it keeps reliably raising its payout and has a pretty good regular yield while also overseeing one of the more responsible dividend programs you’ll find—a program that, when times are good, can shift that payout into high gear. ORI has a two-part dividend system where it pays out regular quarterly dividends, but also special annual payouts based on its profits for the year. For instance, a $1.50-per-share special dividend delivered last fall brings ORI’s yield into double digits. (Just remember: These special dividends can vary from year to year.)

Crestwood Equity Partners LP (CEQP) is a midstream master limited partnership (MLP) that owns a number of assets involved in the gathering, processing, treating, compression and/or storage of natural gas, natural gas liquids, crude oil and even produced water. Its assets are primarily located in the Williston, Delaware and Powder River basins, as well as the Marcellus and Barnett shales.

Most investors would be happy for an overall return like CEQP’s, which is up 8% in a down market. Flip side? That’s nowhere near what other MLPs and the energy sector as a whole are doing. 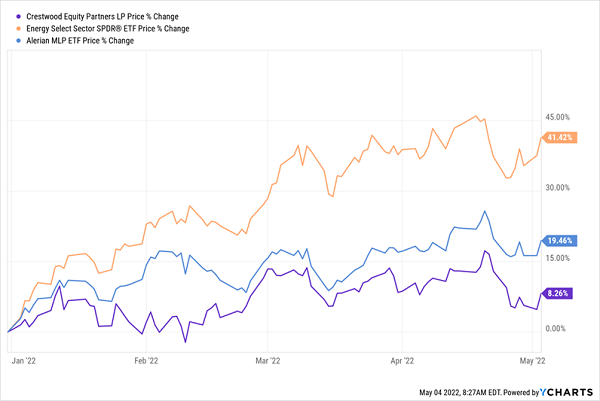 Holding CEQP back was a generally lousy first quarter in which both EBITDA (earnings before interest, taxes, depreciation and amortization) and DCF (distributable cash flow, which is what MLP distributions are paid out of) were both lower than Wall Street expected.

That said, the company reaffirmed its full-year guidance and expects Williston, Powder River and Delaware to become more productive later in 2022. The company is also returning to distribution growth, which means this fat yield, if bought now, will get even fatter on your cost basis.

São Paulo, Brazil-based steelmaker Gerdau (GGB) boasts mills in its home country, as well as Argentina, Canada, Mexico and a few other Latin American countries. It’s also the United States’ largest producer of long steel. (Long steel covers a number of products, such as rods, rails and wires, as well as girders and structural sections.)

Gerdau is like most material stocks in that they’re playing in a wildly cyclical field. While both its top and bottom lines have been going in the right direction for a while, you’re not going to get the same operational straight-line performance you’d expect from, say, a company selling soap. 2018 revenues, for instance, came in at 46.2 billion Brazilian reals, declined to 39.6 billion in 2019, rebounded to 43.8 billion in 2020 and escalated to a massive 78.3 billion in 2021.

Fortunately, that’s not an anomaly—sales are expected to remain at varying levels above 70 billion reals over the next two years. Really, Gerdau is just chugging along.

Investors Have No Beef With Brazil’s GGB 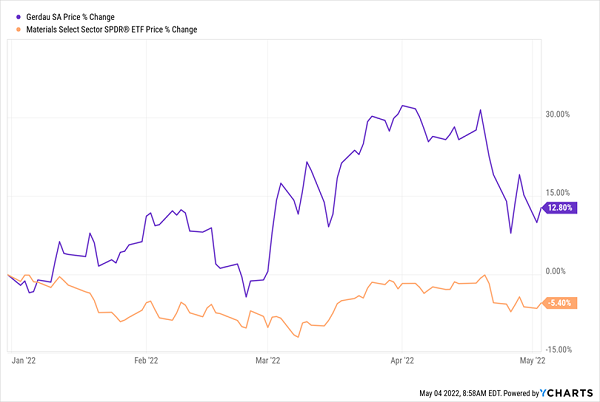 GGB is similar to the likes of General Motors (GM) and Ford (F) in that it seems perpetually cheap, but a quick drop in April has really put the stock into deep-value territory.

We should note, though, that Gerdau is a “young man’s dividend stock.” That is, it can produce a lot of income, but it doesn’t do it consistently. Gerdau will pay out at least 30% of the year’s adjusted net income in dividends, but payouts are all over the map. Its last four dividends were 3.95 cents, 29 cents, 7 cents and 10.5 cents. That’s difficult to plan your retirement around—but easier to deal with if you’re letting compounding do its thing over a few decades or so.

OneMain Financial (OMF) provides personal installment loans to millions of Americans, many of whom have non-prime credit scores.

It can be a turbulent business, but it did grow like a weed during COVID. And while it’s cooling off, it hasn’t chilled. Delinquencies, for instance, have been ticking up over the past few months, but that’s mostly seasonal—they’re actually slightly lower year-over-year. OMF shares are performing admirably compared to the sector as a result. 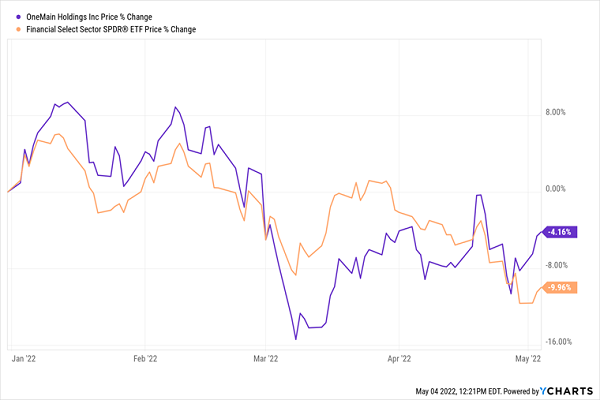 This is a hardy business—one that expects itself to be profitable even if the U.S. slips into recession. Meanwhile, it’s improving upon shareholder rewards in not one but two ways:

Now, based on that quarterly dividend, OMF yields right around 7.7%. But OneMain is another routine special-dividend payer, and that sum has improved for years as well. Once you factor in a $3.50-per-share special payout from August 2021, OMF’s true yield is actually above 12%.

The problem, of course, is that it’s called a “special” dividend for a reason. There’s no guarantee that you’ll get the same amount each year—or even that you’ll get any extra dividend some years.

Which is why I prefer the peace of mind I get from my favorite “triple play” holdings: The 7%-yielding “No Withdrawal” retirement portfolio.

We all know you need enough income to cover all of your regular expenses. And we probably all inherently know that we should be holding high-quality stocks. But investors often overlook the importance of growing their nest egg in retirement – that way, if the unexpected happens, you won’t cripple your dividend-producing potential to dig out of trouble.

Get on Google and search for a set of “best stocks” by some of the mainstream financial outlets. I have—and after a few quick analyses of these “pro” sets of picks, I calculated likely total returns of between just 3% and 5% annually, based on so-so dividends and potential share appreciation from paltry estimated earnings growth now that the “recovery bump” is starting to be priced in.

Those kinds of returns will force you to bleed your nest egg dry just a few years after you retire. And you have worked too hard, for too many years, just to struggle financially in your golden years.

My “No Withdrawal” portfolio features the best of several high-income assets. Of course, only a handful of stocks and funds meet my rigorous standards for this multipurpose strategy. But the result is an “ultimate” dividend portfolio that provides you with …

A portfolio with that level of yield that also delivers price gains can allow investors to live off dividend income alone without ever touching their nest egg. No worrying about paying the mortgage or other monthly bills. No wondering how to survive should another financial disaster strike.

Let me show you how to secure the comfortable retirement you’ve worked your tail off to enjoy. Click here to discover how you, too, can build a “No Withdrawal” portfolio and live off dividends alone. I’ll also reveal how you can get the names, tickers, buy prices and full analysis of my favorite high yielders 100% risk-FREE!