These 2 “Battleship” Dividends Love Inflation (and Yield Up to 5.5%)

These days, we contrarian income seekers are following a simple rule: “trade lightly.” Truth is, we saw this mess coming. It’s why we started lightening up our positions in my Contrarian Income Report service back in November.

We didn’t sell any of these dividend payers because something was wrong with them—far from it!

They’d simply ridden Jay Powell’s cheap-money wave as far as they could. Now that wave is flowing in reverse, with rates rising and the Fed shedding bonds from its balance sheet at a rate of $95 billion a month.

All of this has caused the stock market to, ahem, correct.

Someday soon we’ll reload. In the meantime, we’re collecting rich dividends from our current holdings (our Contrarian Income Report portfolio yields 7.5% as I write this, with many issues paying monthly), making our shopping list and getting set to pounce on the next big buying opportunity—because it’s coming.

But what if you can’t wait?

I get it—and I hear it regularly from readers. And indeed, there are some “safety-first” dividends out there that profit from inflation and boast low volatility—a godsend today and for 2023, when a recession is likely in the cards.

We’ll look at two good examples of these types of stocks below. (Note that these aren’t official CIR recommendations, but they may work for you, depending on your portfolio makeup and situation.) First, let’s talk about what a stock needs to thrive in this inflation-and-recession spooked market.

When hunting for reliable dividends, we primarily want stocks that have held up better than their peers in this dumpster fire. It only makes sense—if they’ve stayed strong now, they’re likely to keep doing so. And when the market (inevitably) turns, they’ll have a sturdy base from which to jump.

Note that we’re not looking for bargain P/E ratios here. Just stocks with resilience that are backed by strong societal trends.

Finally, we want companies with the pricing power to pass their rising costs off to consumers, letting them not only survive inflation, but thrive during it.

Let’s get started with …

A Canadian “Battleship” Dividend That Charges Whatever It Wants

BCE Inc. (BCE) is a Canadian telecom provider that has pricing power in spades! It, along with Telus Corp. (TU) and Rogers Communications (RCI), essentially form an oligopoly, with an iron grip on Canada’s telecommunications market. That’s why Canadians pay some of the highest cell phone rates in the world.

Now let’s talk relative strength. As you can see, BCE, which also controls major Canadian television network CTV and owns the Toronto Maple Leafs and Raptors, is holding up just fine in the mess we’ve been facing this year, thumping American cousin Verizon Communications (VZ) and staying in the green. 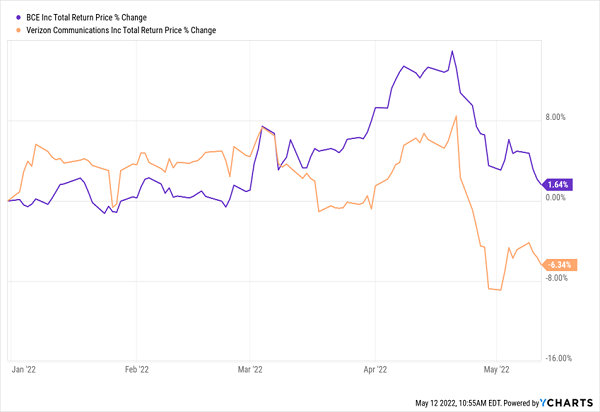 Throw in a nice 5.5% dividend and a record of strong and steady payout growth (the dividend is up 70% in the last decade, in Canadian dollars), and you have all the makings of a “battleship” dividend payer. It’s not surprising that this one is a mainstay in Canadian investment portfolios, but we don’t have to miss out stateside: BCE trades on the NYSE, so it’s easy to buy.

Electric utilities are another go-to at times like these, and American Electric Power (AEP) is one of the biggest, with 5.5 million customers in 11 states. Utilities are paying higher prices for coal and natural gas these days, but AEP is smartly offsetting those with a rapid shift to renewables, with plans to produce 50% of its power from clean sources by 2030.

The best thing about utilities, of course, is that they hold up in all market weather, and especially during recessions. And you and I both know that fear of the next recession is rising daily.

The reason for that resilience is pretty simple: people need to heat their homes and run their fridges no matter what, and AEP’s sheer size is attracting safety-obsessed investors (and likely more than a few “refugees” from the clobbered crypto market).

In any event, they’ve powered it (sorry, I couldn’t resist) to a 14% return this year, as of this writing, well ahead of its sector:

Relative Strength? AEP’s Got It 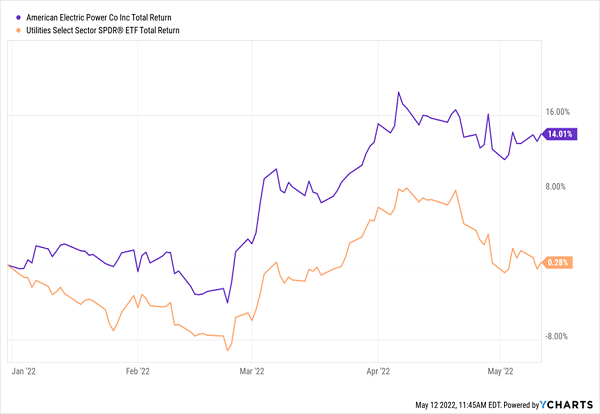 Now let’s talk payouts, because over the last five years, the company has delivered a nice 35% hike in the dividend. As you can see below, those hikes have paced the price higher—a phenomenon I refer to as the “Dividend Magnet”: 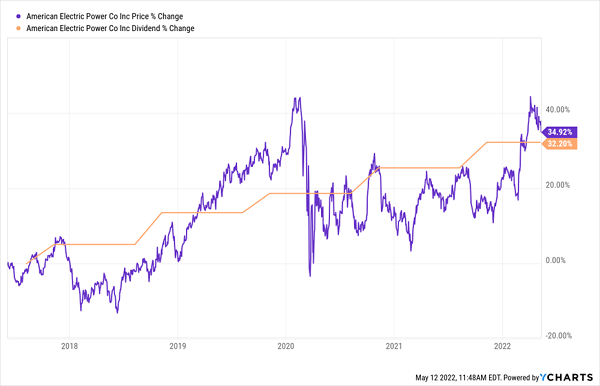 There are likely more dividend-driven gains ahead: AEP pays 58% of its earnings as dividends, which is very safe for a company with steady revenue like this one. What’s more, that ratio is headed in the right direction: 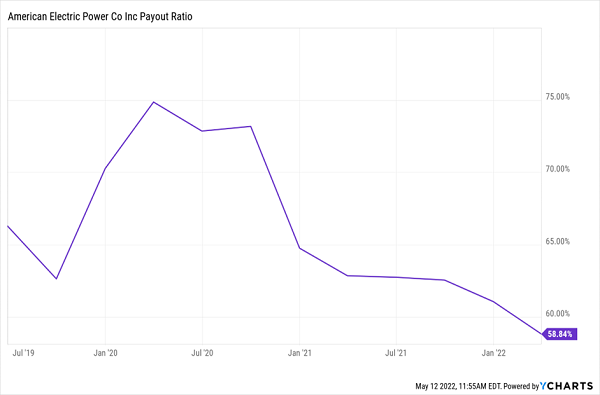 A Once-in-50-Year Retirement Storm Is Here. Here’s How to Save Your Wealth.

We all know Jay Powell is miles behind the curve on inflation. That’s set up today’s 2-part nightmare: a market crash that’s crushing retirees’ portfolios while inflation devours their income!

But don’t worry—there’s still something you can do to protect yourself.

My 2-step plan involves selling the 12 popular income investments my team and I have come across (I’m sure you’re holding at least one of these dead-money plays!) and replacing them with 5 other income investments that offer big yields we can use to ride out rocky markets: these 5 unique buys throw off huge payouts up to 9.1%.

I reveal my plan to fight this once-in-50-year retirement storm in an exclusive briefing right here— I’ll show you how to get access to the 12 duds you must sell now and my 5 “inflation-fighter” dividends yielding up to 9.1%.