Certain closed-end fund (CEF) investors are getting a little desperate for dividends. It’s tough to blame them for reaching for 5%, 6% and even 7%+ yields in a 2% to 3% world.

But by grossly overpaying for funds, they are risking too much capital to bank these payouts. If you own any of the five popular funds I’m about to call out, you should consider selling them immediately.

(There are bargain replacements, after all. I’m talking about funds trading as cheap as $0.88 on the dollar and yielding 7.2%. We’ll discuss specifics in a moment.)

“First-level” income seekers can be greedy one minute and fearful the next. We contrarians make our living (and retirement) by purchasing out-of-favor payouts and selling dividends that are too dear.

Today there are funds trading for as much as $1.39 per share for just $1 in assets. There are others selling at half that price for equivalent portfolios! Here’s why this happens – and how we can capitalize on it.

This Discount/Premium as Margin of Safety (or Lack Thereof)

CEFs, unlike their (“open end”) mutual fund cousins, have fixed share counts. This makes their prices subject to the animal spirit whims of the market – for better or for worse.

If a fund trades at a 12% discount to its NAV, it means we’re able to buy its underlying assets for just 88 cents on the dollar. That’s exactly the type of “discount to intrinsic value” that many successful stock market investors strive for.

On the other hand, when CEF investors get greedy, they actually pay premiums for funds. Bad idea! Let me show you why, and give you five “first-level favorites” to avoid.

DoubleLine’s Opportunistic Credit Fund (DBL) has traded at a rich 8% average premium for the last three years as investors flocked to its high (9%+) yield and celebrity “Bond God” manager Jeffrey Gundlach. An 8% premium means buyers paid $1.08 for just $1 in assets.

How’d that bidding war work out? Not well, with the fund returning just 7% over the entire three-year period – including the dividends: 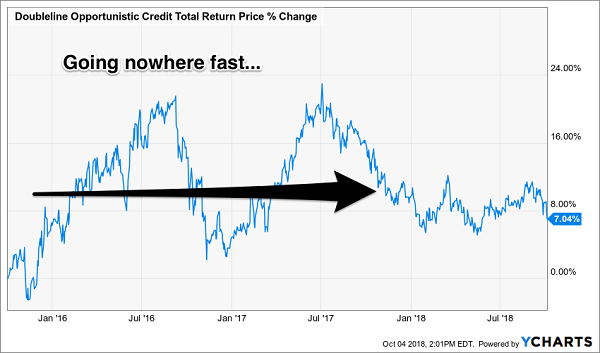 Income investors bought the generous dividend but lost most of it in price depreciation. They made the same mistake as those who pay a high price-to-earnings (P/E) multiple for a stock. They simply got crushed when the multiple began to contract:

Why? The “Premium Multiple” Contracted 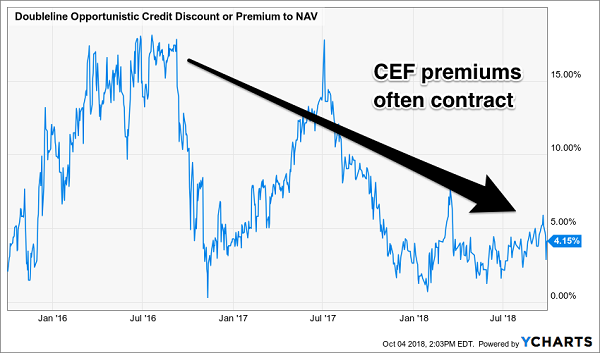 Unfortunately folks are still paying a 3% premium to get into this fund. And that doesn’t make much sense with sister fund DoubleLine Income Solutions (DSL) trading for a 1% discount to its NAV. Same brilliant bond guru, same wide mandate, way better price!

My Contrarian Income Report subscribers smartly chose DSL over DBL in April 2016.  The discount disparity was even larger back then, making it extra lucrative to think contrarily: 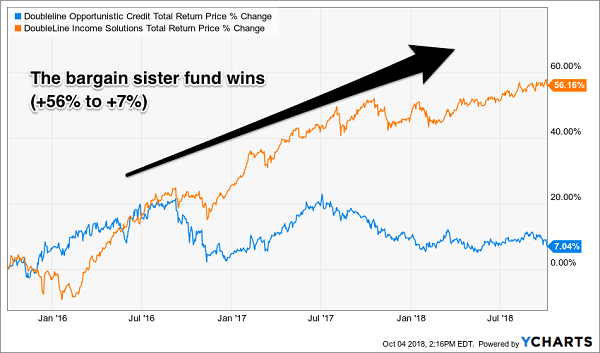 If we’re looking for yield to provide us with retirement income without having to worry about share prices, then we should generally fade premiums.

You probably know the “Bond King” Bill Gross. How about his successor, Dan Ivascyn?

When Gross left PIMCO, a tide of cash followed him out the door. But the flow of money quickly subsided when Ivascyn stepped to the plate and outperformed Gross himself. PIMCO let the King walk because they had their next superstar in waiting.

A money manager of Ivascyn’s caliber will usually cost 2% annually (plus 20% of profits). And it’d take a million bucks or two to get his attention.

So it’s understandable that investors would try to “reach” for Ivascyn and overpay for his fund. That’s exactly what happened with PIMCO Global StocksPLUS (PGP).

In fact, two more PIMCO funds round out our “5 most overpriced” list. If Ivascyn & Co. are at fault, it’s for being too good at what they do. Sadly, though, investors who buy today are paying too much – and likely to see their dividends eaten up by price declines (or worse) in the years ahead:

Don’t despair though. While there is certainly some froth in CEF-land, there are still some dividend superstars to be had. All we need is a bit of second-level thinking.

In June 2004, Fed chair Alan Greenspan began boosting rates from then-historic lows. Over a two-year period, he increased the federal funds rate from 1% to 5.25%. A dizzying pace by today’s standards!

Fed Rate and Muni CEFs Rose in Harmony Then… 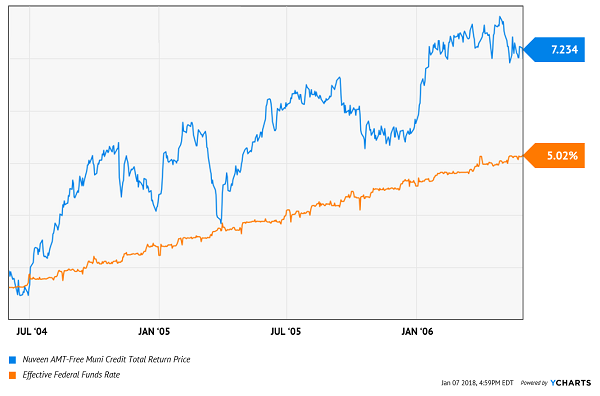 And this rate hike cycle, we can simply update the months and years to see a similar picture: 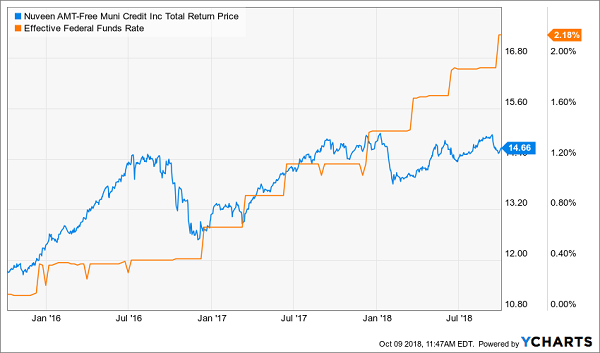 Other types of CEFs were also able to perform well in the face of rising rates. Here are three of the largest CEFs from the 2004 to 2006 time period:

CEFs Beat the Market as Rates Rose Then… 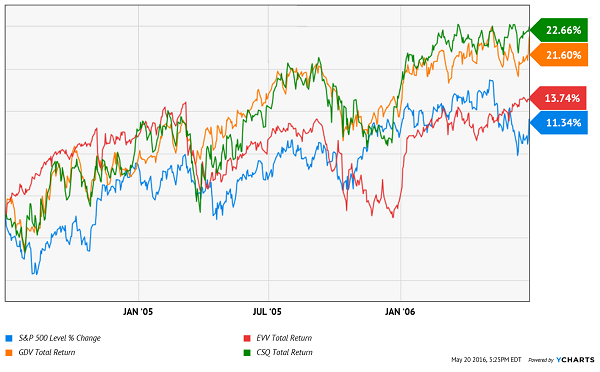 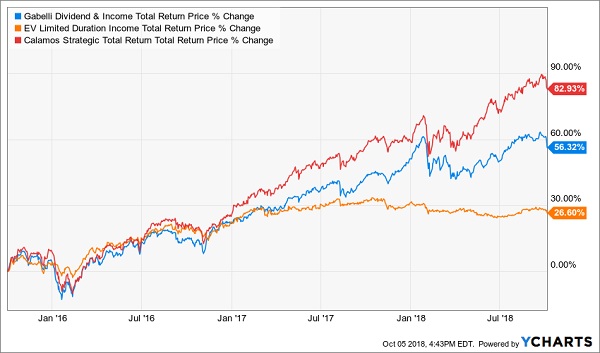 With rates once ticking up, it’s the perfect time to buy the few high quality funds that are still trading for discounts.

Plus these funds all trade at a discount to the value of the stocks and bonds they hold today. This is free money! For example, this fund (which yields 7.2%, by the way) sells for just $11.71 and has a “free” $1.56 discount to NAV baked in! 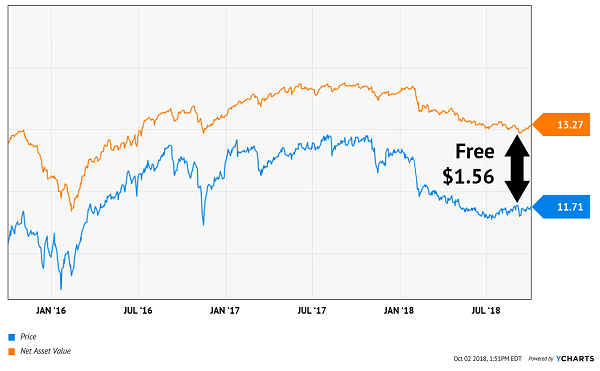 And thanks to these discounts, these four yield kings are also set to explode with massive price upside, too. Remember the old DSL example we discussed earlier? These one-click investments boast similar lucrative setups today.

Simply click here and I’ll share all the details with you, including full details on these 4 Dividend Conversion Machines and how to start their 6%, 8% and 10%+ payouts pumping into your account now.