When the taper tantrum finally hits, these five dividends—up to 12.9%—are likely to directly benefit.

Right now, their profits are being artificially suppressed by the Fed. Once this constraint is lifted, their bottom lines are going to boom.

The Fed is currently buying $80 billion in government bonds every month. Yes, Chairman Jay Powell wants to kick this addiction, but thus far he can only bring himself to “think about it.” Eventually, he will try to cut back on this bad habit. This opens the door for us laypeople to profit and bank some big payouts. 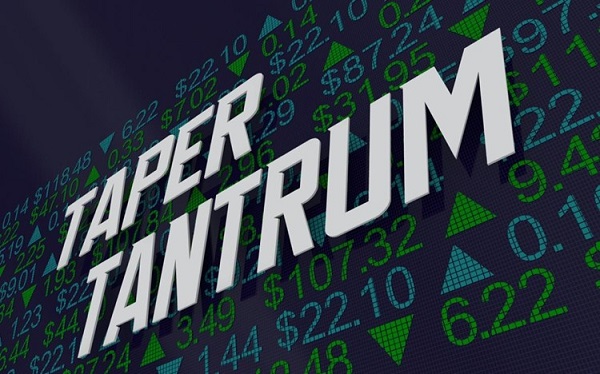 Treasury yields are based on supply and demand. Supply (bond issuance) is huge, but so is demand, with the Fed stepping in for $80 billion per month. When this big buyer cuts back, we’re likely to see the yield on the 10-year note rise to attract other buyers.

As the 10-year yield has risen, so have financial profits. These firms directly benefit from higher rates because their lending profits pop.

Let’s look at five firms yielding between 5.6% and 12.9% annually. All five have their profits artificially suppressed by the Fed today. Will their stock prices likewise pop as the market throws a tantrum and the 10-year rate continues to rise?

Old Republic International (ORI) lives up to the name, as it’s an old-guard general-insurance and title-insurance provider whose roots go back to the 1920s. How ORI differentiates itself is by operating across a number of US businesses that don’t run on the same business cycles, providing an element of diversification within its own niche.

ORI is in the midst of a nearly two-year streak of quarterly earnings beats. Its Q3 profits easily topped estimates on the back of a massive leap in commercial auto policy rates. Its results were so strong, in fact, that several Street pros had to revise their full-year estimates skyward.

More impressive, though, is a six-year streak of top-line growth that has resulted in solid earnings (albeit it still variable earnings—this is an insurer, after all).

A strong baseline of profits fuels a 22-cent quarterly regular dividend that translates into a 3.6% yield—not eye-popping by any stretch, but more than twice as generous as the sector average. It’s also constantly growing, hence ORI’s positioning as an S&P Mid Cap 400 Dividend Aristocrat.

Where ORI’s payout transcends from “good” to “great” is its fairly consistent special dividends. Old Republic utilizes a two-part dividend system that sees the insurer pay out a regular dole, as well as annual special payouts based on its profits for the year. The most recent special payout of $1.50 per share elevates ORI’s yield to a mouth-watering 9.5%. 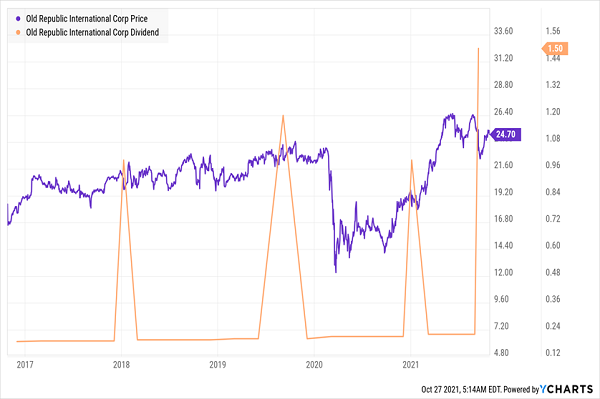 Amerisafe (AMSF) is another insurance play, but this one focuses on specialty workers’ compensation products. The company operates in 27 states and deals in “high-hazard” industries such as construction and trucking.

And like ORI, Amerisafe’s decent yield is largely elevated by special dividends to become a fantastic yield.

Don’t let the term “special dividends” fool you, either. Many companies utilize this for big one-off payments to return the proceeds of, say, a sudden windfall from selling off part of the company. But few firms—including AMSF—use them every year as “top-up” payouts from profits, allowing them to reward shareholders when business is good but keep from slashing a regular payout if they fall on hard times. In the case of Amerisafe, it has been paying a fat $3.50 special dividend like clockwork for years, and just declared a $4.00 per share payout on Wednesday. (Its current regular dividend, by contrast, annualizes to $1.16 per share.)

Unlike Old Republic, however, Amerisafe’s top line has actually been shrinking for years, too. While lower operating expenses have helped the company largely grow earnings despite this, the pros are looking for profits to shrink this year and next, which could put additional pressure on AMSF.

Amerisafe Has Struggled to Gain Traction for Years 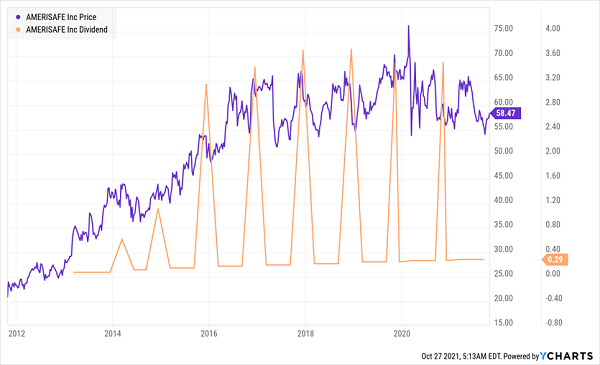 We’ll look at one last special dividend payer in a different financial business.

While MC is on the smaller side, usually ranking outside the top 10 in deals, it’s still no slouch. In 2021, Moelis has been part of Meredith Corporation’s (MDP) sale of its National Media Group operations to IAC/InterActiveCorp (IAC), Kadmon’s sale to Sanofi (SNY), and Parnassus Investments’ sale of its majority stake to Affiliated Managers Group.

Moelis hasn’t been shy about returning that money to shareholders, either. MC has juiced the payout by 62% over the past half-decade, including a 9% hike earlier this year to 60 cents per share. Its special dividends have roughly doubled in that time, and occasionally, MC will actually pay out two specials in a year. 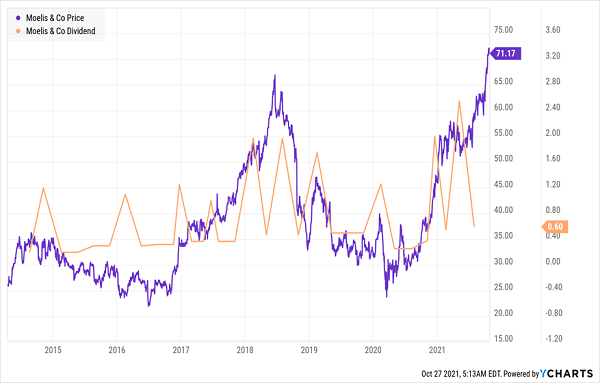 If special dividends just don’t seem secure enough for you, Northwest Bancshares (NWBI) delivers a yield that’s nearly 4x the financial-sector average on the merits of its regular quarterly payout.

Northwest Bancshares is the parent company of Northwest Bank, which was founded in the late 1800s and currently offers your typical banking fare—business and personal accounts, employee benefits and investment management—across 170 locations in Pennsylvania, New York, Ohio and Indiana.

Like many regional banks, NWBI has delivered fairly steady growth coming out of the Great Recession. The bank did have to pull back its dividend a little—by a relatively trifling 6% in 2010, and that only lasted a year—and has returned to payout growth since, at a clip of about a penny per share to its current 20 cents.

That said, growth in general is modest here; Northwest Bancshares shrank its business somewhat in 2021 by selling off its insurance division to USI Insurance Services in April. Solid credit quality across its loan portfolio and benefits from higher interest rates should keep the company from languishing too much…but NWBI has struggled to regain its pre-COVID levels, and that could be the case as long as its growth remains subdued.

While Most Banks Have Recovered, NWBI Hasn’t Recaptured the Magic 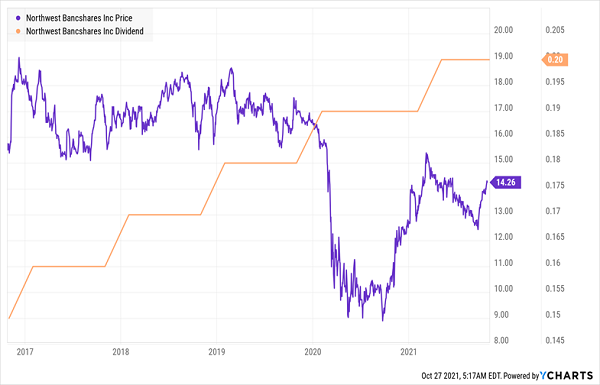 Sculptor Capital Management (SCU) is an alternative asset manager that provides multi-strategy, credit and real estate platforms across three continents. It serves a wide range of clients, too, from public and corporate pensions to sovereign wealth funds to high-net-worth individuals and family offices.

The name might not be terribly familiar, but some investors might remember Sculptor by its old name: Och-Ziff Capital Management Group.

Asset management can be something of a roller-coaster from an operational perspective, but Sculptor has been a particularly painful ride. Och-Ziff’s assets actually peaked back in 2015. However, the year prior, Och-Ziff was accused of bribing African officials—a matter that finally ended in 2016 when it settled at a cost of $412 million. Customers began something of a mass exodus, pulling their funds from Och-Ziff.

The company tried to rebrand as Oz Capital in 2017, then founder Dan Och stepped down in 2019. Soon after, the company shifted yet again to the current Sculptor Capital Management.

Understandably, all this tumult hasn’t gone over well with shareholders.

Is Sculptor a Shell of Its Former Self? 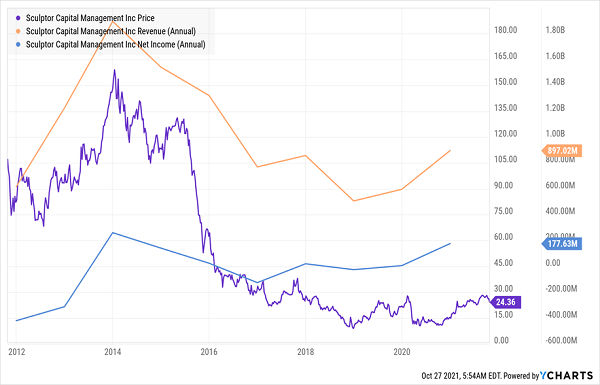 Fortunately for income investors, it also shed its LLC structure, which included kicking the dreaded K-1 to the curb, too.

What they’re paying taxes on is a little more complicated.

Sculptor’s 13% yield sits on a light foundation of just three quarterly payments over the past year or so. The company paid 53 cents per share in March 2020, but didn’t deliver any more cash again until March 2021, when it paid an outsized $2.35 per share. But it has since followed that up with a 30-cent dividend and a 54-cent payout.

In short, this is an erratic payment that’s difficult to get a solid read on. The new Sculptor needs to put together a clearer track record before retirement planners can feel safe depending on this dividend.

If you’re mapping out a successful retirement portfolio—one where you never need to touch your nest egg to live the good life—you need a heckuva lot more dependability than that.

It’s not just about high yields. You need quality, too. And some real price potential, for that matter.

But I have some good news there: That’s exactly what the “triple play” stocks and funds in my 7%-yielding “No Withdrawal” retirement portfolio have to offer.

We all know you need enough income to cover all of your regular expenses. And we probably all inherently know that we should be holding high-quality stocks and funds. But investors often overlook the importance of growing their nest egg in retirement – that way, if the unexpected happens, you won’t cripple your dividend-producing potential to dig out of trouble.

Get on Google and search for a set of “best stocks” by some of the mainstream financial outlets. I have—and after a few quick analyses of these “pro” sets of picks, I calculated likely total returns of between just 3% and 5% annually, based on so-so dividends and potential share appreciation from paltry estimated earnings growth now that the “recovery bump” is starting to be priced in.

Those kinds of returns will force you to bleed your nest egg dry just a few years after you retire. And you have worked too hard, for too many years, just to struggle financially in your golden years.

My “No Withdrawal” portfolio features the best of several high-income assets. Of course, only a handful of stocks and funds meet my rigorous standards for this multipurpose strategy. But the result is an “ultimate” dividend portfolio that provides you with …

This portfolio will let you live off dividend income alone without ever touching your nest egg. You won’t have to worry about paying the mortgage or other monthly bills, nor will you have to wonder how you’ll survive if a financial disaster strikes.

Let me show you how to secure the comfortable retirement you’ve worked your tail off to enjoy. Click here and I’ll provide you with THREE special reports that show you how to build this “No Withdrawal” portfolio. You’ll get the names, tickers, buy prices and full analysis of their wealth-building potential – and it’s absolutely risk-free!