Sick of Overpriced Stocks? Buy This 9.7% Dividend at a 16% Discount

There’s an intriguing trend showing up in second-quarter earnings. And today I’ll show you how you can jump on it with a cheap closed-end fund (CEF)—I’m talking a 16% discount here.

Then there’s the dividend: a “hidden” 9.7% yield. I’ll say more about that shortly.

This trend might sound boring at first, but it’s crucial, because it proves that most folks have the wrong idea about the markets: they should be buying instead of fretting over interest rates, the next recession or other headline-driven fears.

But now more than ever, it’s where you buy that’s important. And the overlooked trend I’ve discovered proves that you need look no further than our own backyard: in the USA.

The truth is, companies that rely on the US for the bulk of their sales are beating other, more global, firms.

Second-quarter earnings that have been reported so far tell us that S&P 500 companies with over half their sales coming out of America have seen their profits rise 3.2%. Meanwhile, companies dependent on revenue abroad saw their earnings fall 13.6%.

Meantime, revenue from the S&P 500 as a whole has risen 4%, on average, crushing expectations of 2.8% growth heading into the quarter. And three-quarters of S&P 500 firms have reported earnings per share above estimates.

So all that fear about an earnings recession you may have heard about? Now it looks like strong sales might pull up profits up to the point it might not happen at all.

But the takeaway is this: by focusing our buys on US-oriented companies, we’ll put ourselves in a strong position for rising profits (and dividends, too).

A great way to do this is through a bargain CEF focusing mainly on domestic demand.

Luckily, there’s one fund nicely set up to let us do just that: General American Investors Company (GAM), which trades at a 15.8% discount to NAV (the third-largest discount of any US equity CEF). The reason why is so silly that it’s the perfect market inefficiency for us to capitalize on. I’ll explain in a minute.

First, though, let’s look at GAM’s history, which is solid, with 10% annualized total returns over the last decade and relatively low volatility: 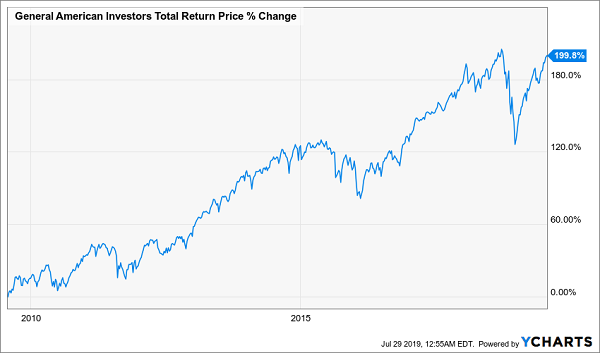 GAM’s portfolio is ideal for today’s market, with its top two holdings focused on the US consumer: retailer TJX Companies (TJX) and waste-manager Republic Services (RSG), which zero in on opposite ends of the product cycle, from purchase to disposal.

And with both companies getting almost all their sales in the US, GAM is clearly betting on the American consumer spending more than consumers elsewhere.

By the way, if these sound like old-economy companies to you, don’t worry: GAM also counts innovators like Amazon (AMZN), Alphabet (GOOG), Cisco (CSCO) and Microsoft (MSFT) among its top 10 holdings. Plus it also has a solid position in Warren Buffett’s Berkshire Hathaway (BRK.A), making this an attractive fund for diversified bets in growth and value companies while focusing on the strong American economy.

Which brings me back to the discount. If GAM is so good, why is it so cheap? Simple: dividend confusion. 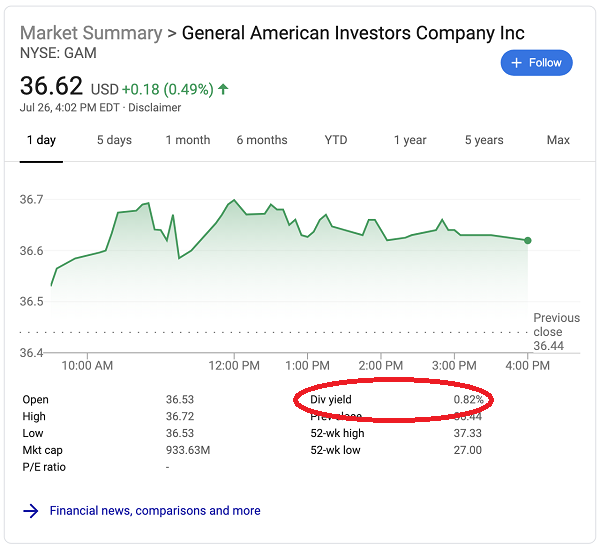 Look up GAM on Google Finance, Yahoo Finance or any other popular stock screener and you’ll see a laughable yield of 0.82%. Since most CEF investors are income focused, this won’t cut it—so they cut GAM out and quickly move on.

But that 0.82% yield is misleading. GAM has a low “ordinary” dividend because it saves its capital for the end of the year, when it pays out a large special dividend.

Big Payouts for the Patient 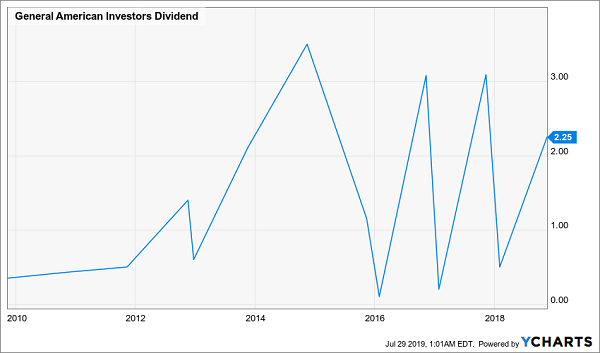 If you held GAM to the end of last year, you got a dividend yield of 9.7%, based on its end-of-year market price. That’s a lot bigger than what Google Finance and Yahoo Finance are telling the masses, so it’s no wonder GAM has such a huge discount.

That’s why, when it comes to CEFs (and any investments), it pays to look deeper. It’s how we uncover hidden gems like GAM, while other investors pass them buy.

Yours Now: An Ignored 9.4% Monthly Dividend (With Upside)

I mention the importance of investing in the US now because that’s where I’ve focused with my latest CEF pick. And I want to share that hidden gem with you now.

Like GAM, this fund pays a huge dividend: an outsized 9.4% yield!

But unlike GAM, this off-the-radar fund gives you its hefty payout every single month. This outstanding monthly-dividend fund is in the latest issue of CEF Insider (which just landed in members’ inboxes last Friday).

In a moment, I’ll show you how to get all the details on this breakthrough monthly payer—and a no-obligation 60-day trial to CEF Insider, too.

In fact, if you love monthly dividends (and who doesn’t?), CEF Insider is for you: as I write, 11 of our 21 holdings pay you their dividends every single month.

In other words, if you buy into this dynamic portfolio of income plays (average yield: 7.3%) now, you can look forward to more than half your income stream coming in every 30 (or 31) days!

And check out the return my latest pick (in orange below) has delivered in the last decade—it puts GAM (and the S&P 500) to shame!

My Pick Doubles Up GAM’s Return 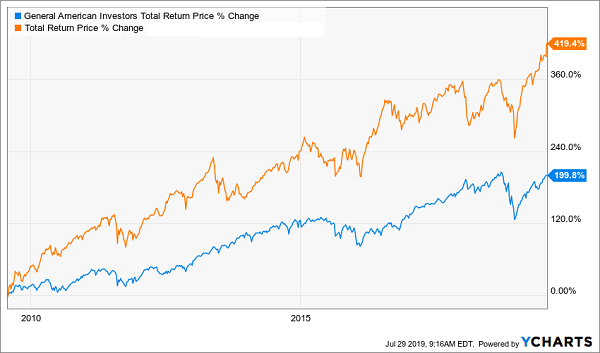 And yes, there’s more gas in the tank here, because this fund is perfectly positioned to climb as the Federal Reserve cuts interest rates, which will lower both this fund’s borrowing costs and those of its holdings, too.

Like I said, this CEF pick is yours when you take a no-risk trial to CEF Insider. On the following page, I’ll give you an opportunity to get this issue with your no-risk 60-day trial.

I’ll also share my own personal CEF-picking strategy and show you how to grab a free one-of-a-kind Special Report revealing 5 other CEFs the big ETF players (I’m looking at you, Vanguard and iShares) don’t want you to know about.

That’s because, if the mainstream hordes caught wind of these 5 cash machines, whose average yields clock in at a monstrous 8%, they might never buy an ETF again!

Don’t miss out. Click here to take out a 60-day trial to CEF Insider (including that just-released 9.4%-yielding pick I told you about above) and discover 5 of my other top CEF recommendations (average yield: 8%; forecast 12-month price upside: 20%) now.