With the market on the rise from its Christmastime lows, it’s natural to wonder if you’ve missed out on the rebound.

Good news: you haven’t—and today I’m going to tell you why we’re still looking at a terrific buying opportunity, even though stocks have gained more than 5% since bottoming in late December:

The Recovery Is Here 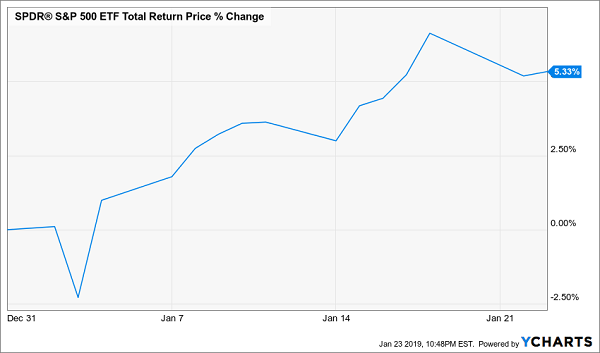 The 5.3% jump since the start of 2019 isn’t the result of fundamentals (those haven’t changed), new news (there haven’t been any significant developments) or an end to political gridlock (the shutdown has remained in effect). Instead, it’s been a clearly psychological change: with the new year, the market has a new attitude.

When it comes to short-term trends, psychology is by far the most important factor. People sell when they panic and buy when they’re greedy—which is why the contrarian, seeking long-term profits and a stable income stream, does the opposite and buys when people panic (because they’re overselling cheap assets) and sells when people are greedy (because they’re overbidding assets beyond their true value).

And that’s the biggest reason why bear markets aren’t to be feared—they’re to be embraced in a bear hug your portfolio will eventually enjoy.

Another Reason to Love the Bears

That isn’t the only reason to not fear bear markets, however. There’s one key factor you should cling to during every downturn—and take into account when you’re on the hunt for contrarian bargains: the length of a bear market.

On average, bear markets have lasted 14 months from beginning to end since World War II, with the average decline being 33% from top to bottom.

However, on average, bear markets have recovered to their pre-bear-market high in an average of 14 months—meaning that the average investor who ignores short-term volatility will find that their portfolio fully recovered in about as much time as they saw it weaken.

Let’s dig deeper. Since 1945, we have had a total of nine bear markets with an average 35.8% decline among them. Also, unsurprisingly, the longer the bear market, the deeper the decline:

Note how the biggest decline of them all was the most recent: the 2007–09 Great Recession is the sort of once-in-a-lifetime event we aren’t likely to see again anytime soon. That didn’t stop many Americans from bailing on stocks during its depths, meaning they missed out on the 48 months of recovery that followed it and the 290% gains in the decade since: 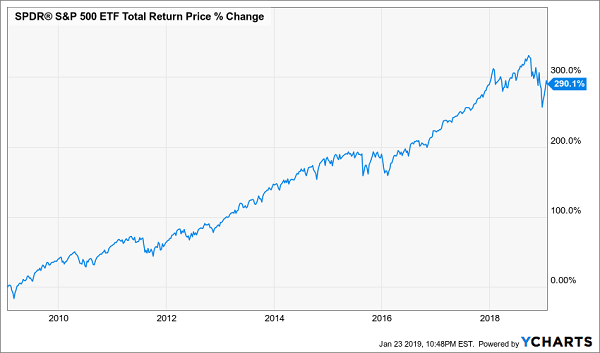 Of course, we can’t only buy stocks when they’re at their weakest—but every bear market is a clear buying opportunity, because it’ll take just about a year for the market to recover to its pre-bear-market levels—which means massive profits for people who bought when stocks were at their bear-market lows.

How Will 2018’s Bear Market Be Remembered?

My table above doesn’t include the 2018 bear market, for one reason: it isn’t over yet. 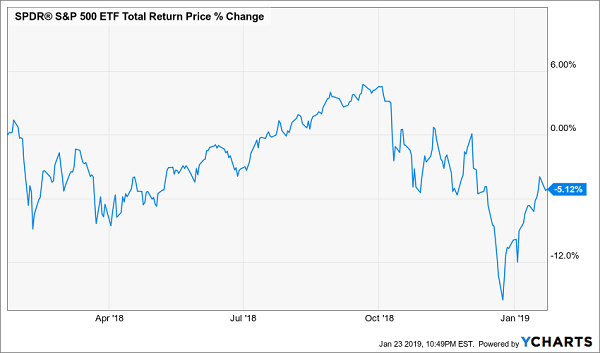 If the market continues on its uptrend, we can say that the bear market itself lasted a total of three months (really a bit less, since the market bottomed on December 24 after starting to fall on October 3).

And if we assume the same rate of recovery as we’ve seen since the market’s Christmas low, a very rough estimate would say that we’re halfway through the recovery after it lasting about a month. That would mean the total recovery time will be two months in total, shorter than the length of the downturn and far too little time in the long haul to get worked up about.

So what’s the key takeaway now? Simply this: the time to buy stocks is now—before this bear market’s short-term low prices have fully disappeared.

On that note, I want to show you …

You’ll do even better if you buy the 4 closed-end funds (CEFs) I’m pounding the table on now.

Don’t worry if you’ve never heard of CEFs. Because there are only two things you really need to know about these retirement-altering cash machines:

Each of the 4 incredible funds I’ll show you when you click here is locked in for 20%+ in “snapback” gains in 2019 alone as their silly discounts revert to normal.

One of these picks, for example, trades at an unusually large 13% discount to net asset value (NAV, or the value of its underlying portfolio). That simply can’t last, especially when you consider that this discount was as narrow as 5% in August 2017 and has been near (and above) par many times in the past!

Don’t Let This Deal Get Away 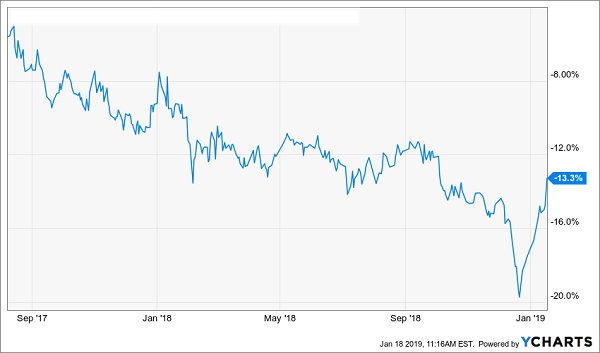 Now is the time to buy this one—before it makes its next move higher.

Don’t wait another moment. Click here and I’ll give you the full story on all four of these amazing CEFs, including their names, ticker symbols and why now is the best time to buy them that I’ve seen in years.