But take just a second and imagine that you dodged both of those disasters, resting easily on the sidelines during the chaos. Then you moved into stocks for the rest of the year. In that case, 2020 just may be your best year yet! 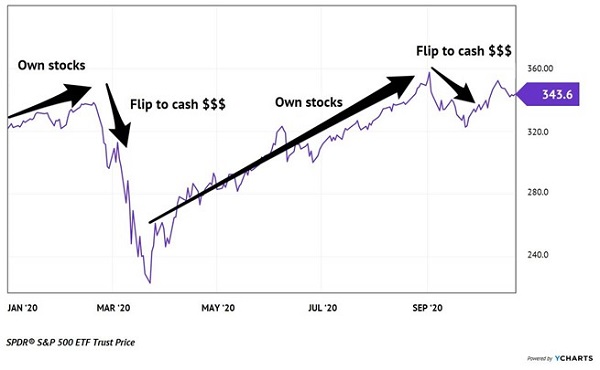 Of course, no one can precisely predict the market’s next move. But what I’m about to show you is as close as I’ve ever seen an investing system get. In fact, I custom-built the indicators that drive this powerful tool precisely for 2020’s wild markets.

I call it Dividend Swing Trader. It works like this: we buy into a big dividend just as the underlying stock is set to take off. Then we ride its momentum higher and flip to cash—locking in our price gain and taking some nice dividend cash with us, too!

(A small group of savvy investors has been grabbing big upside, and big dividends, from this service already; I’ll give you a chance to join them, with no obligation, at the end of this article.)

To make it work, we look for stocks with two simple things:

I know this sounds a bit abstract, so let’s dive into an actual Dividend Swing Trader move that handed us a gaudy 21% gain (with a big slice of that in dividends!) in under five months.

Back in March, B&G Foods (BGS)—maker of frozen and packaged fare like Green Giant peas and Cream of Wheat cereal—did something odd: after trailing the market for most of 2019, it bottomed before the S&P 500 in the spring, then started gapping higher.

That made sense: with restaurants out of the picture for many folks, shoppers were stocking up on non-perishable foods. This checked our “relative strength” box and was my first tip that B&G was setting up for a fast run higher. Look at this chart: 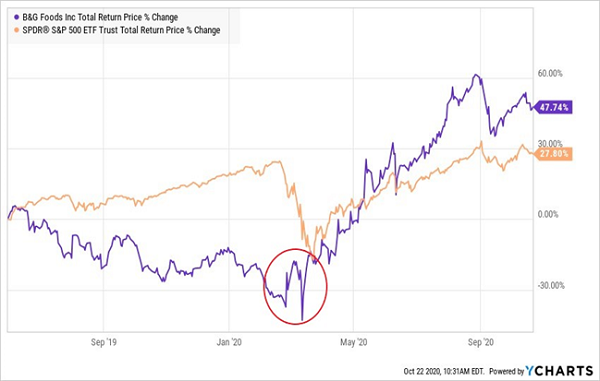 Step 2: Look for a High Dividend With Growth Ahead

With a big price gain setting up, we dug deeper into the dividend—and found a safe, massive payout that looked primed for growth. B&G shares yielded a gaudy 7.8% when we bought, and the dividend was backstopped by an ultra-safe payout ratio of just over 50% of free cash flow (FCF).

With all these winning elements in place: a high current yield, a safe dividend with the potential to grow (and attract more investors!) and a base of relative strength, it was time to make our move. On June 4, I issued a buy call to our small crew of Dividend Swing Trader members.

Here’s what happened next:

An Entire Year’s Worth of Gains—in Less Than 5 Months! 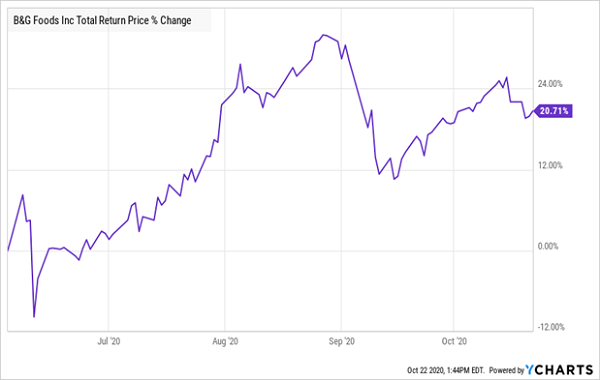 Let me tell you something here: a 21% return is what we look for from our Dividend Swing Trader portfolio on a yearly basis. B&G delivered that in less than five months—and with a quarter of that return in safe dividend cash!

Most advisors will tell you that such a performance by a stock that yields 7.8% is impossible. But there it is.

And we didn’t get down in the weeds with our short-term B&G trade, getting tied up with P/E ratios, PEG ratios, price-to-sales ratios or whatever your preferred valuation measure is. We simply looked for a healthy, high dividend and that relative strength I talked about earlier. That’s it.

In fact, relative strength is so powerful that it can sometimes drive you to a fast double-digit profit all on its own.

Take gold, a go-to for many folks in a crisis—especially a crisis that has anything to do with inflation. And a strong trigger of inflation is a wave of money printing fiscal stimulus like the one Fed Chair Jay Powell unleashed last spring: 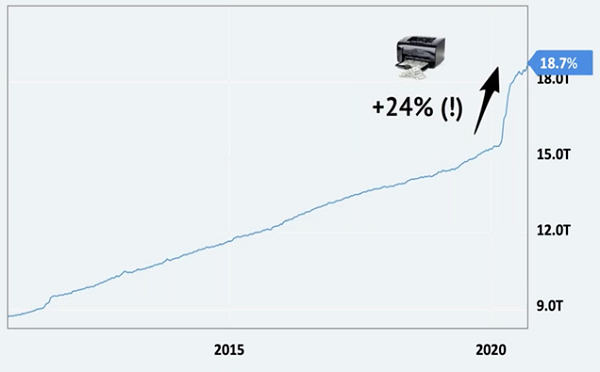 Sure enough, gold began to gap higher. Trouble was, I didn’t have a high-yield play on the trend, as most gold miners pay low dividends. That meant it wouldn’t work for my Contrarian Income Report service, whose portfolio yields 8%, on average. I also knew this was likely to be a short-term trade, and CIR members like to draw on their 8%+ payouts for months—and often years.

But it was perfect for my Dividend Swing Trader group. So we went after the gold miners through the Van Eck Gold Miners ETF (GDX), which only yielded about 0.5% but whose relative strength was just starting to appear when we pounced on July 2. Six weeks later, on August 13, we checked out with a fast 12.4% gain. 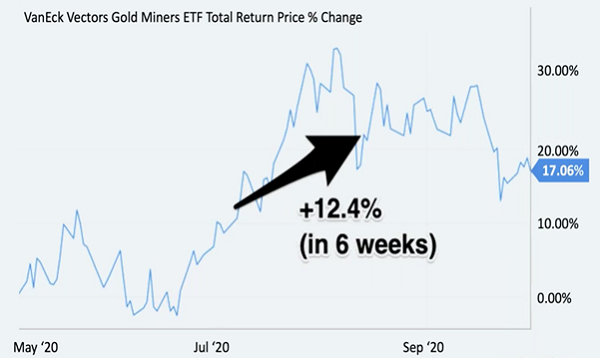 As you can see, it was the right time to exit. GDX then drifted sideways before moving lower this fall, as the September stock selloff took gold down with it.

That’s a perfect segue to the other half of our Dividend Swing Trader strategy—protecting your cash.

In September, my indicators told me a pullback was due, so we held off on any new trades. We entered the correction with our portfolio half in cash and the other half weighted toward “low beta” stocks, or those that are less volatile than your typical S&P 500 name. Those would be stocks like B&G Foods, whose 7.8% income stream kept on flowing through to us uninterrupted!

Pulling in Our Sails Before the Storm Hits 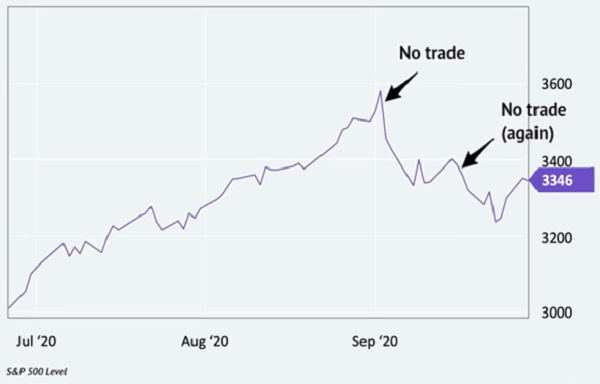 A Careful, Nimble Approach (With a Dividend Kicker)

Before I give you an opportunity to try out Dividend Swing Trader yourself, there are two things you should know about the service.

The first is that our DST picks pay dividends far in excess of those of typical S&P 500 stocks—the stocks and funds in our portfolio now throw off an average 5% dividend. Cherry-pick the three highest payers and you’ll get payouts of 6.8%, 8.3% and 8.4%.

The second, as you can probably tell, is that we aren’t following a “buy and hold” strategy here, where we keep our positions for years. Instead, as you saw with GDX and B&G, we’ll buy in so that we catch the bulk of a major move up (and collect our dividend payouts), then make our exit, taking our gains (and dividends!) with us.

The final step? Roll our gains into another high yielder set to soar. Rinse and repeat.

There couldn’t be a better time to “road test” Dividend Swing Trader. Just last Thursday, I issued a rare “bonus” issue naming 10 stocks that are begging us to buy them now.

I’m issuing these trades now because these 10 high yielders (with gaudy payouts up to 8.4%) have all triggered my system’s proven “relative strength” indicators.

Because all 10 of these dividend machines are tied into the next big trend we’ll see no matter who wins the election: another wave of Fed-fueled—and Uncle Sam–fueled—stimulus!

Because we can bet on this: whether it’s Trump or Biden, neither would dare tamper with Jay Powell’s money-printing machine. And both will want to make sure the next round of stimulus checks goes out (despite the drama we read about in the daily news), and they get the credit.

The nature of politicians—it’s one of the most predictable trends there is!

It’s also a trend we can tap for fast gains and BIG dividends through these 10 NEW trades.

But you do NOT want to wait around. Because our Dividend Swing Trader picks tend to move quickly, you only have a narrow window to make your move if you want to grab the most upside here.

Don’t miss out! Start your no-risk trial to Dividend Swing Trader and get instant access to my full portfolio, my just-released 10 dividend swing trades and 4 free special reports that lay out for you, step-by-step, exactly how my system works.