Stephen chose a precarious time to buy. He purchased a REIT right before the sector’s ensuing rout. But it didn’t matter because he knew exactly what to buy. He banked an easy $91,405 on this investment while most first-level REIT investors sweated and treaded water.

Park Hotels & Resorts (PK) was a relatively new REIT that was spun off by Hilton Worldwide (HLT) at the beginning of 2017. Director Stephen Sadove, around this time last year, bought 9,600 shares of his own firm – right before REITs sank in an epic rout that soon unfolded.

The “dumb” REIT index VNQ was soon dumped in unison by investors. It’s since recovered, but has still only delivered 3.5% gains in 13 months. Stephen, meanwhile, has enjoyed 36.7% total returns (including dividends) on his smart trade, good for a $91,405 haul: 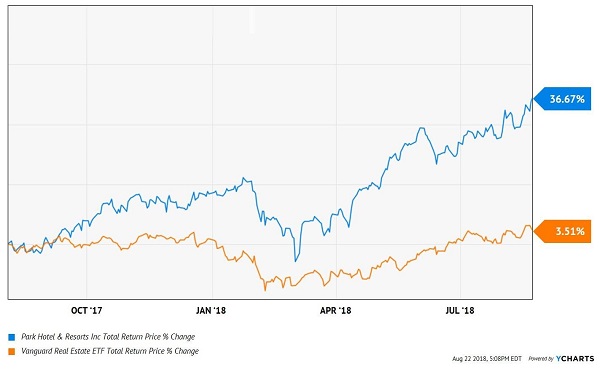 His buy was a “no brainer” in hindsight. PK was trading for less than 10 times its funds from operations (FFO), which is the rough equivalent of a stock selling at a price-to-earnings (P/E) ratio under 10. In today’s pricey market, low P/Es – and 10 is low in any environment – are rare.

When we see them, the stock is usually cheap for a reason: the company isn’t growing, or its business model is threatened by Amazon, for example.

Our man Stephen has made his money but there are three more cheap lodging stocks to be had today (even with the market’s recent runup).

The three lodging REITs we’ll discuss here yield between 4% and 7%. Better still, they’re all trading cheaper than the industry average. I bet their insiders are digging through their own bargain bins now.

Let’s talk about “The Other Apple.”

I’ve actually gotten a few emails from readers who first came across this real estate investment trust by accident. They tried to look up Apple (AAPL), and instead they got Apple Hospitality REIT (APLE).

They sound similar, but there are just a couple subtle differences in their business models.

Apple Hospitality, is one of the largest hotel REITs in the country, boasting nearly 31,000 rooms in its 242 hotels in 88 markets across 34 states, serving attractive urban and suburban locations. Its portfolio is primarily split between Marriott (MAR) and Hilton (HLT) brands, though it does own one hotel under a Hyatt (H) brand as well.

The REIT’s 2018 results were admittedly uninspiring. While net income of $206 million was up 12.9% year-over-year, its modified funds from operations (MFFO) were off 1% to $1.72 per share, and its Revenue Per Available Room (RevPAR, an important hotel metric) was just 0.5% better. But it’s worth noting that the company was going up against some difficult 2017 comps.

The ace up Apple’s sleeve right now is a skinflint valuation of just 9.6 times its MFFO, as well as a 7.3% dividend yield that’s well on the high end of its historical range. 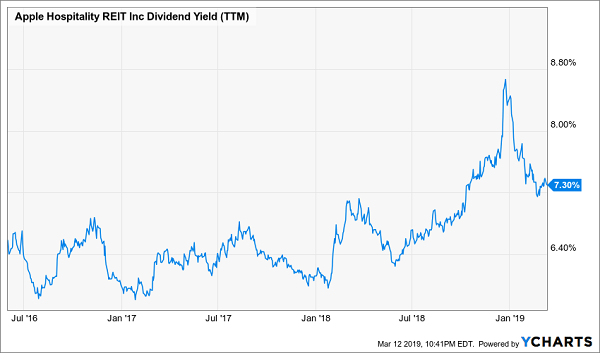 Host Hotels and Resorts (HST) is the 800-pound gorilla of the hotel REIT world – an S&P 500 member with 52,119 rooms worldwide across 93 luxury hotels across the Hyatt, Hilton and Marriott brands, as well as some smaller resort operators.

Last year, I highlighted this company as a “deep moat” winner, with the company itself pointing out that its “geographically diverse portfolio of hotels located in major urban centers and resort destinations” have “relatively higher barriers to entry.” But a few other factoids worth mentioning?

Sounds impressive, but what’s in the numbers?

Total comparable hotel RevPAR for 2018 grew 2% year-over-year to hit the midpoint of the company’s guidance, which it stepped up in its Q1 report last year. The rest of its results blew through expectations. Net income of $1.15 billion crushed the forecasted range of $617 million to $657 million, and adjusted FFO of $1.77 per share topped the high end of the predicted $1.67 to $1.73 per share.

Host, like Apple, is dialing back its expectations for 2019 a little, but if it hits a midpoint of 1% RevPAR growth and $1.77 per share in AFFO, that’s still an admirable year in what could be a slower economic environment. And you can buy that performance at less than 11 times AFFO right now. 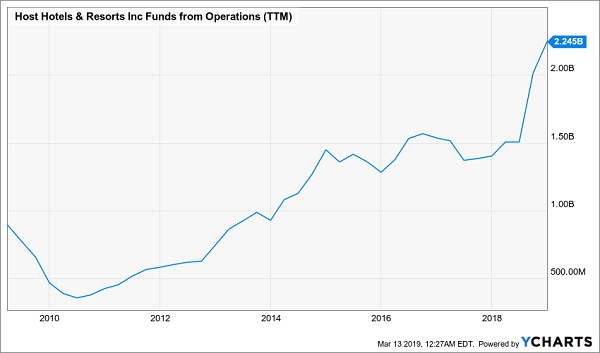 Diamondrock Hospitality (DRH) is another hotel operator that understands the importance of positioning – not just geographically, but financially. Diamondrock targets the well-to-do via 31 premium hotels and resorts concentrated in “key gateway cities and destination resorts” in North America and the U.S. Virgin Islands. Its acquisitions over the past decade perfectly illustrate the strategy: the REIT has dumped $600 million worth of “non-core” hotels but snapped up roughly $2 billion worth of urban and resort hotels.

Marriott and Hilton again have a hefty presence here, as does Hyatt via its 2018 acquisition of Two Roads Hospitality, but Diamondrock’s stable includes other premium names such as Vail Resorts (MTN) and Ocean Properties. Its hotels are either in urban locations such as New York City and Washington, D.C., or in destination cities such as Lake Tahoe (The Landing) and Key West (Havana Cubana).

Diamondrock is precisely flat over the past year, but don’t blame its operational performance, which was good enough in 2018 to merit a little more share-price optimism. Comparable RevPAR was up 1.3%, and adjusted EBITDA and AFFO each ticked up about 2%. And understand: those figures include several business disruptions thanks to natural disasters in Key West, northern California and St. Thomas. 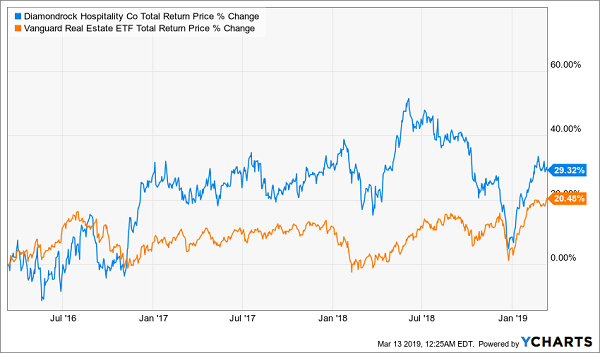 Like DRH, guidance isn’t screaming, but comparable RevPAR growth of between 0.5% and 2.5%, as well as AFFO on par with this year at the midpoint, is certainly at least worth a look with shares trading at less than 11 times its adjusted FFO.

The suits at Merrill Lynch say you need $738,400 to retire on. Several investment experts say the magic number is $1 million. Suze Orman, and I quote, says, “You need at least $5 million, or $6 million. Really, you might need $10 million.”

Sure, you might need $10 million if you’re holding the likes of Host or Diamondrock. They’re good stocks, but their yields are too small to deliver enough retirement-sustaining income on a realistically sized portfolio. (Those payouts aren’t getting bigger, either – they’ve been stagnant for years!)

But if you stockpile the picks in my “8% Monthly Payer Portfolio,” you can bank on a comfortable retirement with a mere $500,000 nest egg.

This substantial-dividend strategy can net you nearly $3,300 in payouts every month, from an average 7.6% annual yield. (Mind you, that doesn’t even include the roughly 10%-plus average upside in these winners that will expand your nest egg!)

There’s no strange options tactics or complex trading routine. You can live off a $500,000 portfolio indefinitely by following just two simple steps.

This portfolio includes some truly amazing dividend stocks, including …

Get these and the other monthly dividend picks that will unlock $3,300 in monthly income right now – for free! Click here to receive each and every pick in my 8% Monthly Payer Portfolio – complete with tickers, buy prices and full analyses – at absolutely NO COST to you.