Here are 3,594 Funds that Crush the Market, and the One to Buy Now

If you’ve been told it’s impossible to outperform low-cost index funds because the market’s too efficient, you’ve been misled.

The truth is, there are many funds that have been beating the stock market for years. And here’s something really surprising: there are more funds pulling off this feat now than there have been in a long time!

So much for not beating the market!

That leads me straight into the two things I want to discuss with you today:

Despite all the worry about a bubble in stocks, the market’s 2019 gain is mostly the result of a return to normalcy after the overdone sell-off of late 2018.

This is something we never hear about, with the pundits’ relentless focus on year-to-date numbers. But if we rewind to September 20, 2018, right before that panic began (and when the market was also at an all-time high), you’ll see that stocks are up a reasonable 9% since that day:

Most of 2019’s Gain Is a Rebound From the Selloff 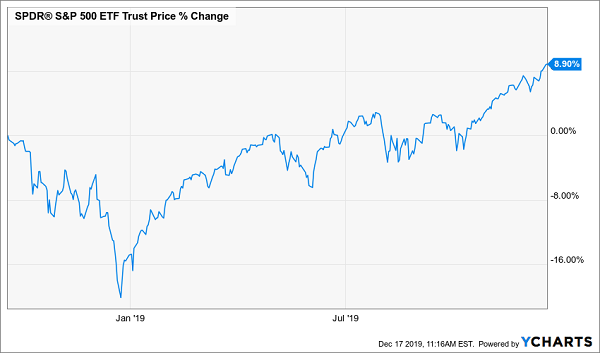 Here’s something else that might surprise you: this September 20 example is no one-off. Truth is, skipping out on stocks when we hit all-time highs is pretty much always a bad idea.

Here’s another example of how selling at the top can work against you, using an ETF from the tech sector, the Invesco QQQ Trust (QQQ). If you held QQQ and sold it when the market hit all-time highs last time, in July 2019, this would have happened: 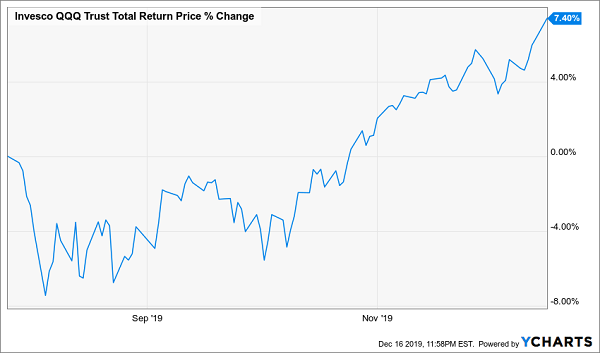 A more extreme example of selling at all-time highs happened in late 2015, when the Fed announced it would start hiking interest rates while corporate profits were declining. A lot of people saw this as the start of a recession—and sold. Here’s what QQQ sellers missed out on, if they’ve stayed out of the fund since:

QQQ Soars from the “Top” 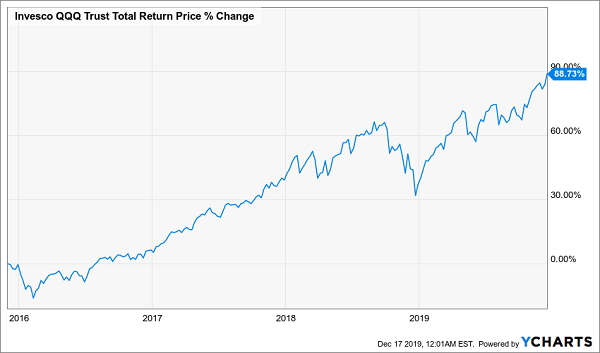 Since that “top” before the perceived upcoming storm, QQQ went up about 23% per year for four years straight. That’s a lot of profits to miss out on!

You might be wondering why I’ve chosen QQQ here. It’s because tech is the perfect example of a sector where too much caution results in missed opportunities. With the tech sector, growing adoption of new technologies, from smart power grids to 5G networks, around the world has resulted in big profits, and upside, for shareholders.

You can see that in the 10-year performance of QQQ, which has nearly doubled the S&P 500’s return:

Too Much Caution Costs a 422% Return 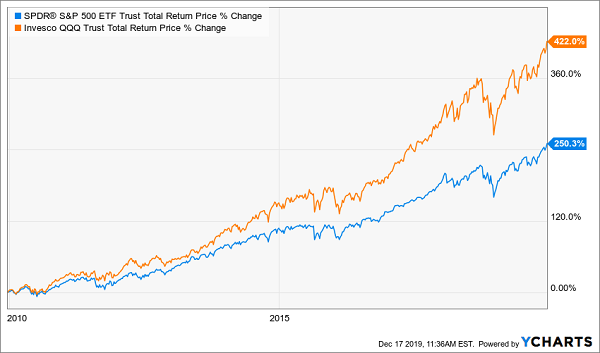 There’s just one problem for income-seekers like us, however: QQQ’s measly 0.7% income stream.

This is where active funds—and particularly that CEF I mentioned earlier—come in. It’s the BlackRock Science & Technology Trust II (BSTZ), a massive fund with $1.6 billion in assets that pays a 6% dividend stream, almost nine times more than QQQ pays—and five times more than Apple (AAPL)—the biggest tech stock of them all.

Another advantage: BST is managed by BlackRock, one of the world’s leading investment firms, with over $7 trillion in assets under management, giving them insight and market access the rest of us can only dream about.

BSTZ is a new fund, having been launched just this past June. What’s more, we can get it at a 1.8% discount to net asset value (NAV, or the value of its underlying portfolio). So in other words, you’re getting BSTZ’s holdings—successful tech firms like Marvell Technology Group (MRVL) and Advanced Micro Devices (AMD)—for 98.2 cents on the dollar.

These discounts are only available with CEFs: QQQ, as an ETF, always trades at or very close to (usually within a tenth of a percent of) NAV. That’s yet another reason (besides the huge dividend) to go with this fund over its ETF cousin.

As well-managed as BSTZ is, its 6% dividend is pretty small for a CEF—and so is its 1.8% discount.

We can do better.

And we’ll start with the 4 CEFs I’ll share with you right here. They have 2 critical strengths that help them crush stocks in any market weather:

And that 8.4% yield is just the average: the 4th fund on my list yields an incredible 10.3% now, and its payout has skyrocketed 113% in the past decade! 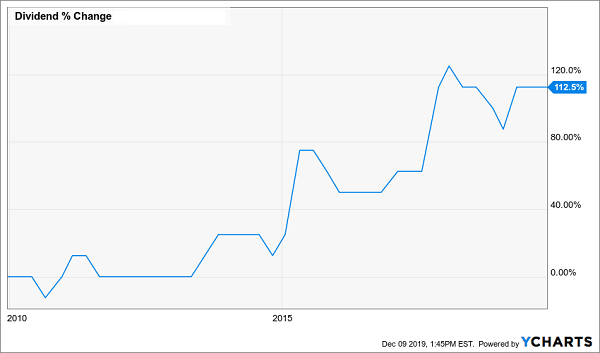 With a dividend like that, you’re already beating the market’s average yearly total return right out of the gate—in dividends alone! Of course, I’m still calling for 20%+ price upside here, too, to go along with that massive cash payout.

Full details on all 4 of these terrific income plays are waiting for you now. Don’t miss this rare opportunity to score them at a bargain. I’ll give you names, ticker symbols, dividend histories and everything I have on each of these 4 cash-rich CEFs right here