Forget the Banks: These Lenders Dole Out Dividends up to 10.1%

America’s in a dividend desert, and that’s forcing income hunters to get creative. Are 10.1% paying mREITs the answer?

The good news? A pair of market niches—business development companies (BDCs) and mortgage REITs—can put 3x that amount of money into our pockets.

I recently pointed readers to a “3-click” BDC portfolio yielding 10.9%, which is a little less than the BDC average of 12%. There’s only one area of the market that is capable of delivering more income: mREITs, a subset of the real estate sector that yields an incredible 12.3%. 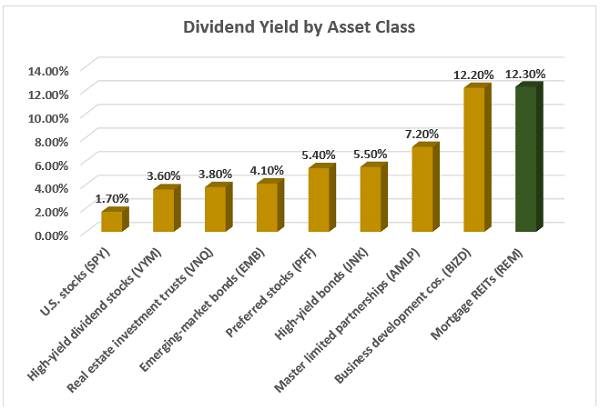 But while it’s part of the sector, mREITs have far less to do with real estate than their traditional brethren. Mortgage REITs invest in paper, not land. As the name implies, they buy and/or originate mortgages and mortgage-backed securities, typically for residential or commercial properties. They make their money not from rents, but from interest payments.

Therein lies the difficulty of investing in mREITs. You’re not really taking part in the long-term appreciation of properties that makes real estate so attractive in the first place. Instead, you’re effectively gambling on interest rates cooperating with the way these companies have positioned their mortgage portfolios.

These big bets can go south in a hurry. Part of the reason mREITs yield so much is that they’ve been slower to recover from the bear market than equity real estate stocks. Far slower. 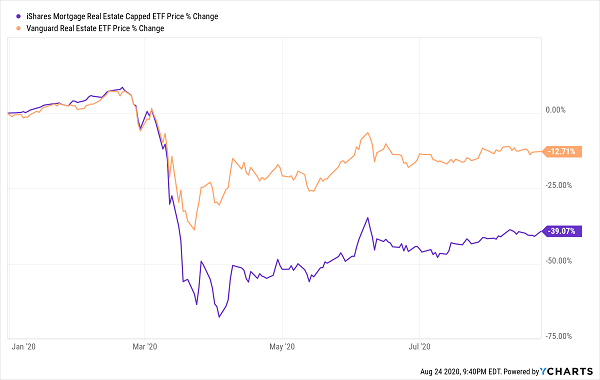 Clearly, it’s a mistake to invest broadly in the space given that it’s littered with losers. But if we can find a diamond in the rough, we get to plant another diversified source of sky-high yield into our long-term holdings.

Redwood Trust is a primarily residential-focused mREIT that deals in single-family and multifamily mortgages. The business is spread across three units: residential lending, business purpose lending and third-party investments (effectively “other”).

Redwood, like many other mREITs, was hammered hard by 2020’s lockdown economy. But these drops have less to do with the overall quality of their portfolios, and more to do with the sudden bout of volatility and a collapse in liquidity. John Worth, Nareit Executive Vice President for Research and Investor Outreach, explains:

mREITs typically use repurchase (repo) agreements, a form of short-term finance, to fund their agency RMBS and CMBS holdings, which allows them to leverage their capital. In early March, repo lenders began refusing to accept agency CMBS (and some other securities) as collateral and requiring large haircuts on the collateral they already held. As these funding issues propagated through the system, margin requirements on outstanding repo agreements increased dramatically, resulting in margin calls on mREITs that were sometimes in excess of their available liquidity.

The gut-punch for income investors: RWT, which had announced a 6.7% increase to the payout earlier in the year, was forced to delay that payout for liquidity reasons, then cut its second-quarter dividend by 61% to 12.5 cents per share. Meanwhile, the stock remains off 56% year-to-date including dividends.

Sadly, This Chart Isn’t the Exception to the Rule 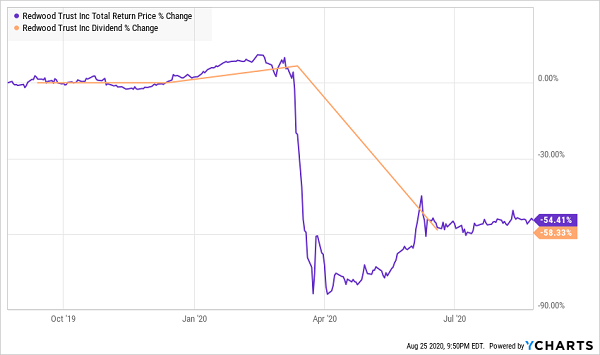 The good news for Redwood Trust is that it’s at least back on the upswing. Book value rebounded to $8.15 per share during the second quarter, and GAAP earnings returned to positive territory. You might even be tempted to play a rebound given RWT still yields 7% after a massive dividend haircut.

But the mREIT’s second-quarter snap-back was slower than Wall Street expected, and this company still appears too vulnerable to gamble on amid a still-brittle economic recovery.

New Residential (NRZ) has suffered a similar fate to Redwood Trust. Shares are still worth only about half of what they were to start the year, and the dividend was slashed by 90% early on in the crisis.

And yet, this interesting and differentiated REIT is giving off a few positive vibes of late.

New Residential makes its money from a number of sources, including residential loans, loan origination and a little servicing. But the biggest chunk of its operations are dedicated to “MSRs & Servicer Advances.” MSRs are effectively “the right” to collect payments from a borrower – so rather than owning these loans, NRZ instead owns the rights to service these loans.

These MSRs do wonders when mortgage refinancing slows down. Unfortunately, that hasn’t been the case at all, as 2020 has ushered in record-low mortgage rates that has millions of Americans scrambling for a new deal. This business racked up a $451 million net loss in Q1 that thinned in Q2, but still bled $283 million.

But the company at least started to make amends to income investors. After dropping its payout from 50 cents per share to a nickel a quarter earlier, New Residential doubled the Q2 dividend to 10 cents per share. 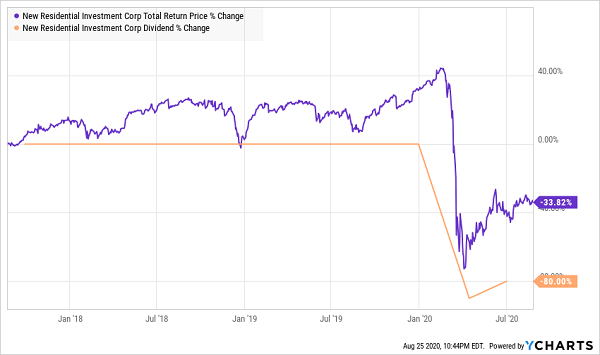 Core second-quarter earnings came to 34 cents per share, exceeding analyst estimates and covering the cash distribution several times over. Origination profits were strong thanks to a 44% jump in higher-margin retail originations, which Piper Sandler’s Kevin Barker says “could be an important driver of earnings going forward.”

It’s still early in the recovery, but NRZ’s progress, as well as a deep 25% discount to tangible book value, could be worth a flier. Longer-term investors should wait for more evidence of a “sticky” comeback.

Ready Capital (RC) is an attention-grabber for a few reasons. For one, the 10.1% is much more in line with the kind of income we want to siphon out of the industry.

But also, Ready does real estate and business lending. RC will lend up to $45 million on multifamily and commercial real estate. But it also originates small-balance commercial loans (SBCs), Small Business Administration (SBA) loans, and does residential mortgage lending via its GMFS subsidiary.

That business blend gave Ready some extra firepower during the COVID crisis, in that it was able to play a part in the government’s Paycheck Protection Program (PPP). In fact, the company facilitated the origination of $2.7 billion in PPP loans to more than 40,000 small businesses. That resulted in $23 million in fees during Q2, and the company expects another $18 million in fees.

Those fees obviously are a one-time bump, but it’s one of several ways in which Ready Capital’s diversified business lines can help RC roll with the punches. The mREIT also was able to leverage low interest rates into a record $1.2 billion in residential mortgage originations during the second quarter. And Ready has resumed its core commercial real estate lending after putting that entire operation on pause during Q2.

Yes, Ready wasn’t exempt from the industry’s dividend scythe. But the cut wasn’t as deep—a 37.5% reduction to 25 cents per share. And that new payout is covered almost three times over by core profits. 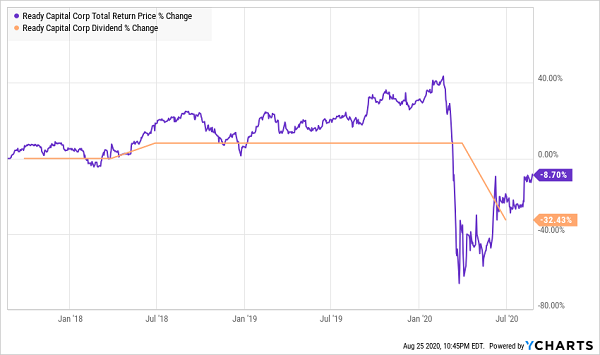 The result is a spry-looking mREIT that still yields a mouth-watering 10.1%, and whose assets you can buy for 70 cents on the dollar right now.

Ready Capital isn’t the biggest name in the space, but it’s certainly one of the most exciting … as far as slinging mortgages and business loans goes.

But a bet on any mREIT is a complex gamble on the Federal Reserve and the U.S. economy behaving in a way that helps their mortgage investments pan out. And are you really willing to bet your retirement nest egg on that, given double-digit unemployment and a Fed chair that’s running the money printer 24 hours a day?

I’m not. You shouldn’t either—and thanks to my “Perfect Income” portfolio, you don’t have to.

We’re in a bull market again, but if you’re an income investor, it sure doesn’t feel like it. This is one of the worst income droughts in American investing history. Many have watched their blue-chip dividends go up in smoke over the past few months:

Even if you had a million dollars in cash to plunk down right now, a traditional 60/40 investment would earn you just $13,000 a year! There’s nothing safe, conservative or prudent about that.

But the dividend-rich stocks in my “Perfect Income Portfolio” can deliver so much more. I frequently talk to my readers, who tell me that these stocks have managed to double, triple and sometimes even triple the dividends they were earning from their old income portfolios. And it does so while also …

Take control of your financial legacy today. Let me show you how to get 2x to 4x your current income with this simple, straightforward system. Click here to get your copy of my Perfect Income Portfolio report today — including tickers, buy-in prices, dividend yields, full analyses of each pick … and a few other bonuses!