Forget Netflix: This Will Grow TWICE as Fast (and pay 5% dividends)

You may be surprised to hear that big hedge-fund honchos are struggling with the exact same question you probably are when it comes to tech stocks: are they pricey or cheap?

The good news? I have the answer for you—and a little further on, I’m going to name one fund that taps straight into that answer to hand you rich 5% dividends, plus the massive upside tech is renowned for.

But before we get to that, let’s look at why the biggest names on Wall Street disagree on this question, and the one dead-obvious indicator that many of them have walked right by.

Hedge-fund billionaires began by asking themselves whether to double down on the FAANG stocks: Facebook (FB), Apple (AAPL), Amazon (AMZN), Netflix (NFLX) and Google (Alphabet; GOOG, GOOGL), which have crushed the broader market (here represented in dark blue) for the last five years: 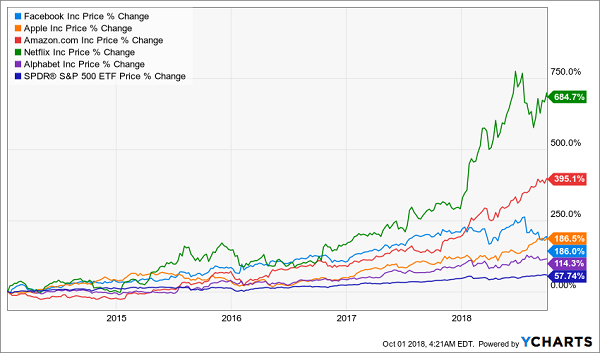 The rampant run in tech stocks has spawned a torrent of headlines about overvaluation and risk—and Facebook’s latest woes have fanned those fears: 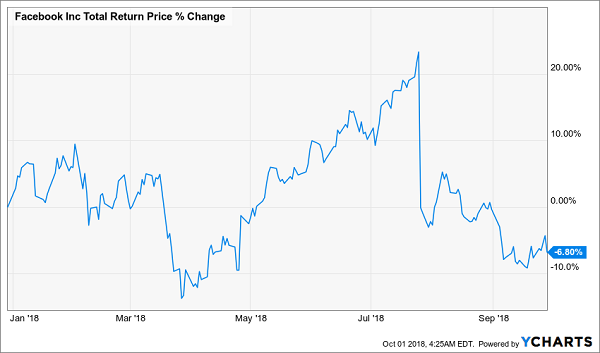 But that hasn’t stopped some hedge-fund billionaires from sticking with FAANG.

Take, for instance, Julian Robertson, the famed founder of Tiger Management, who turned $8 million in 1980 into over $22 billion by the late 1990s. This summer, Robertson told CNBC that he has confidence in FAANG. “I don’t think … the tech stocks are frothy at all,” he said, adding that they’re the cheapest they’ve ever been “relative to the rest of the market.”

Robertson, however, isn’t preaching to the choir. Oaktree Capital’s Howard Marks, a multi-billionaire with a strong track record in making big bets in the debt market, is worried.

Marks is concerned that momentum is driving these stocks, saying that, although “They are great companies,” they’ve been overbid by ETFs, which “may have accentuated the flow of capital into these stocks.” In short, Marks disagrees with Robertson’s argument that FAANG is cheaper than the rest of the market.

So how can we measure that?

Obscure Metric Cuts Through the Noise

Since Netflix doesn’t earn a consistent profit and Amazon isn’t focused on profits at all, looking at P/E ratios doesn’t work here—especially since investors are buying these companies (yes, even Apple) for revenue growth. So what if we compared their price to their sales?

Let’s go one step at a time.

First, the typical method of looking at the price investors pay for revenue is the P/S ratio (price to sales), which is similar to the better-known P/E ratio but uses revenue instead of earnings. Let’s do that with these companies: 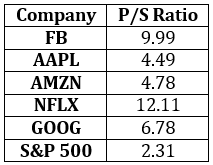 Whoa! This looks terrifying—and Netflix’s double-digit price-to-sales ratio is particularly horrifying. Because of these companies’ mega market caps (including Apple’s over $1-trillion market cap and Amazon’s near-$1 trillion), their price-to-sales ratios are all well over double those of the general market.

But, remember, we aren’t just paying for the sales, but for the growth rate of those sales.

And this is where the tech companies shine—even if most people aren’t paying attention.

The numbers above seem to suggest Julian Robertson’s argument that tech stocks are undervalued is wrong. But if we dig deeper and look at how fast sales are growing at these companies, an entirely different picture emerges.

Here, we’re looking at two things: each company’s price-to-sales ratio and the rate at which those sales are growing. When we compare those two, we get a rarely used metric: the P/SG (price to sales growth) ratio.

This is a crucial metric for tech stocks because we aren’t paying for their sales as much as we are paying for the future growth rate of those sales. The less we pay for the growth rate, the lower the P/SG ratio—and the better buy the stock is.

And, as you can see, only Netflix matches the S&P 500 on this metric. All other tech firms are much cheaper than the broader market when it comes to buying sales growth.

So, yes, Robertson is right and tech stocks remain cheaper than the broader market—even after FAANG is up a whopping 41% in 2018, versus the market’s 8.9% return.

1 Click to Squeeze a 5% Dividend (and Upside) From FAANG

While you could shell out a few thousand just to get one share each of these five companies, a better buy would be a tech fund like the Invesco QQQ Trust (QQQ), a low-cost index fund that owns all these stocks, as well as shares of other firms in and out of the tech world.

There’s an even better way to buy in, though: the Blackrock Science and Technology Trust (BST), which also invests in FAANG and other tech stocks.

BST is better for two reasons. For one, there’s the income. BST pays out a 5% dividend yield—high for any asset and unheard of in tech. This is also over 5 times as much as QQQ’s pathetic 0.7% yield and nearly triple the S&P 500’s 1.7% income stream.

But that’s not the best reason to favor BST.

Because this fund is also destroying the benchmark tech index, QQQ (as it has been doing since its IPO), rising over 38% in 2018, versus the sub-20% return from the index:

A 5% Payer With a Big Growth Pop 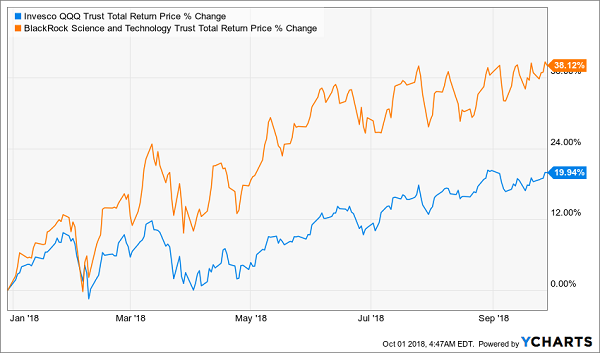 By beating the market, getting you FAANG exposure when FAANG is undervalued and by providing a stable income stream, BST is a no-brainer buy if you’re looking to bulk up your portfolio’s tech holdings now.

Here’s the best news: I’ve just released a new Special Report with 5 MORE bargain-basement funds throwing off FAR bigger dividends than the 5% BST pays. (You can grab your FREE copy of this breakthrough investor guide now by clicking here.)

I’m talking 8% CASH payouts, on average—4 TIMES MORE than your typical S&P 500 stock. PLUS, 2 of these off-the-radar picks even throw off incredible—and safe—9.1% payouts!

All 5 of these income powerhouses are a special kind of fund called a closed-end fund (CEF) that are hallowed by contrarians for the outsized payouts and fast price gains they offer.

A “Must-Have” for Your Retirement Portfolio

I’ve been analyzing CEFs for years—I’m one of only a handful of analysts who dedicates 100% of their time to these unique funds—and I’ve come to one conclusion:

If you want to protect and grow your retirement nest egg (and your retirement income), holding at least one or two of the 5 funds in this explosive new report is an absolute must.

Because in addition to their outsized cash dividends, these 5 funds are hard-wired to catapult us to 20%+ price gains in the next 12 months. Add it all up and you’re looking at a nearly 30% total return here, with a big chunk of that in CASH.

I’ve put everything you need to know about these 5 stealth funds in this unique Special Report—which is waiting for you now.

Don’t wait. CLICK HERE and I’ll share the names, tickers, buy-up-to prices and my complete research on all 5 of these retirement lifesavers.