Buy and Hold Forever: 7 Safe Yields Up to 7%

Have utility stocks been stripped of their safe-haven status?

I’ve fielded that question from a few readers who have rightly pointed out the utility sector’s unimpressive performance during 2020’s market rout and partial recovery.

The short answer? No, it hasn’t. At least not for those of us who look through short-term price jitters to lock-in long-term payouts.

Back in the “good old days,” utility stocks delivered enough income to actually retire on. And thanks to this once-in-a-decade panic, that’s the case once again. Even though utility stocks are well off their bottom, investors still can grab perfectly safe yields of up to 7% in the space.

I’ll even show you how. But first, let’s do a little myth-busting.

As I just mentioned, utilities haven’t impressed during the current downturn. If you look at both the drop from the bull-market peak to the bear-market lows, as well as the entire bear market so far, utility stocks have been a slightly below-average sector. 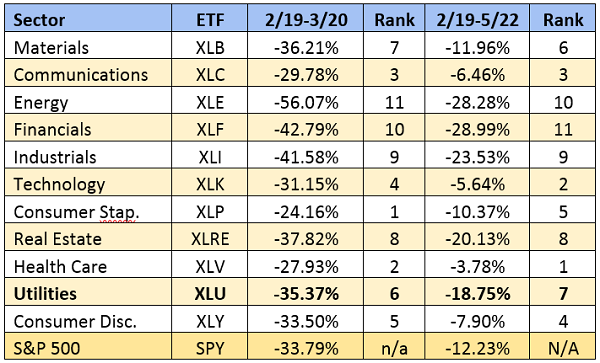 It’s true that utilities typically offer higher yields and lower risk than most of the rest of the market. The idea goes that thanks to their virtual geographic monopolies, the necessity of what they deliver (power, heat, water), and their ability to slowly but regularly raise rates over time, their businesses are insulated from any short-term economic shocks and their dividends are effectively untouchable.

That’s why in normal times, if trouble’s on the horizon, investors might migrate from riskier stocks into the relative surety of utilities, propping up their prices. Hence, they tend to outperform during market lulls.

But anyone expecting them to be invincible against worst-case economic scenarios is just plain silly. And the current pandemic is a particularly nasty outlier.

First, consider the bear market of 2007-09. While the Utilities Select Sector SPDR (XLU) did outperform the index (something it hasn’t done during this bear market), it still lost 42% of its value on a total-return basis.

It’s partially the harsh reality of a recession—many Americans couldn’t afford even the most basic of necessities. Still many more Americans reduced their power consumption to save every penny they could. But it’s also the effect of investors going truly risk-off, where any stock is too risky compared to fixed income or the “safety” of stashing cash under the mattress. 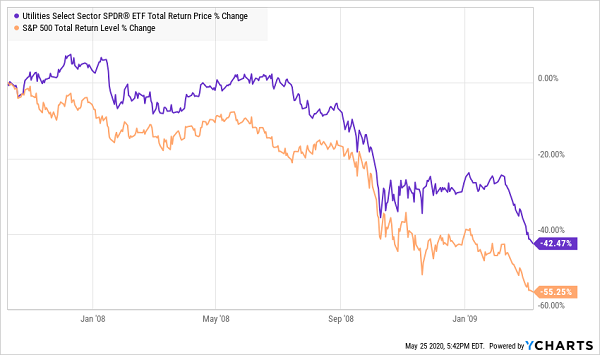 But this economic downturn is different. Stephen Byrd, utility analyst at Morgan Stanley, foreshadowed the utility sector’s difficulty—and the headwind blowing against it—back in March (emphasis mine):

“Commercial electricity usage is likely to be very weak in [the first half], but we currently see this as a manageable and temporary effect for the sector.”

Naturally. Even during the Great Recession, you didn’t have whole industries grinding to a halt literally overnight. But because of the pandemic, offices, malls, factories and many other types of companies have had to close down completely, tanking energy consumption.

The bad news? Utility stocks might continue to be hobbled until we reach some sort of normalcy, and even then, depressed economic activity will still weigh on the sector.

The good news? If you’re in it for the long haul (as most dividend investors are), the utility sector is offering up good to great yields that should richly reward income investors, just as they have in prior decades.

But how you should invest in the sector is an open question. So let’s discuss seven ways to harness the long-term power of utility stocks—yielding anywhere between 2.4% to 7%—while being honest about the strengths and weaknesses of each approach.

Great opportunities in high-quality utility stocks don’t come around very often, but we’re close right now. In fact, I recently told readers of my Contrarian Income Report that one popular name yielding nearly 5% is on my wish list.

“Utes” aren’t exciting, but if we can buy them for cheap on a retest in the next couple of months, we can pocket high, secure yields at a discount and sit on them for years.

You have some interesting options now, too. NextEra Energy (NEE, 2.4% yield), which is the world’s top producer of solar and wind energy, isn’t just a dividend-growth play. It’s a legit growth play! Analysts expect high-single-digit earnings expansion this year and next, which is music to any utility investor’s ears.

Southern Co. (SO, 4.7% yield), which serves about 9 million customers across several Southern states, is a much more traditional utility. But its valuation has cooled down, and its yield has heated up, making it a potential target for investors who want to hold a prototypical utility.

But they’re not all gems. Consider that CenterPoint Energy (CNP, 3.6% yield), which also operates in the South, slashed its dividend by 48% in April.

In other words, inexperienced stock pickers can still get punished for choosing poorly. 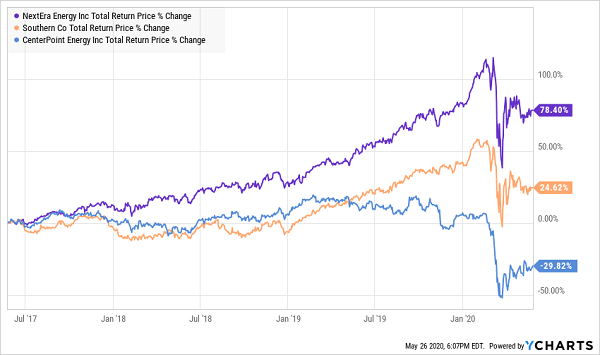 If you want safety, you can find it in numbers. Utility sector funds such as the aforementioned XLU (3.4% yield) or Vanguard Utility ETF (VPU, 3.2% yield) provide one-click diversification for marginal costs. XLU, which holds 28 stocks, costs just 13 basis points annually. VPU, with a wider selection of 66 holdings, is even cheaper at just 10 bps.

Both funds offer exposure to NextEra, Southern and CenterPoint. And that right there is the blessing and the curse of holding indexed products like XLU and VPU. They’re diversified, so holdings like CNP can’t bomb the overall portfolio. But other than company size, there’s no real “gatekeeper” function, so low-quality holdings will cancel out some of the contributions from winners like NEE. 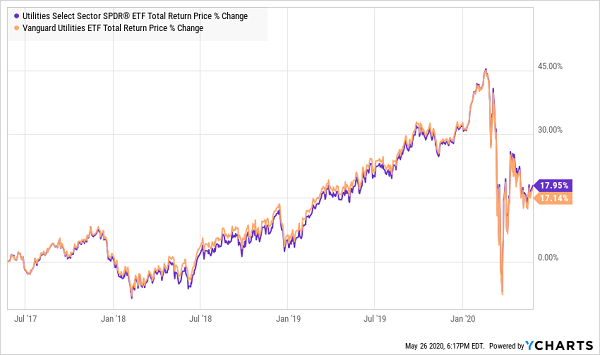 Admittedly, there aren’t a lot of utility-focused CEFs to choose from, but Reaves Utility Income (UTG, 6.9% yield) is an intriguing pick right now.

Reaves Asset Management is a niche fund provider that specializes in the utility sector. However, UTG, which has been around since 2004, isn’t your average utility fund.

For one, it’s actively managed, immediately separating it from most ETFs. Also, Reeves has an interesting take on utilities. While it holds the likes of NextEra and Southern, it also holds utility-esque companies, or firms with utility-esque businesses, such as Verizon (VZ) and Comcast (CMCSA). And because it’s a CEF, it has the ability to leverage debt to gin up returns; it does so at a fairly high leverage ratio of nearly 24%.

All that translates into a high yield of nearly 7%, and it’s paid monthly, which thanks to compounding actually delivers better performance than a quarterly payer with the same yield.

And Just Look At Its Long-Term Performance! 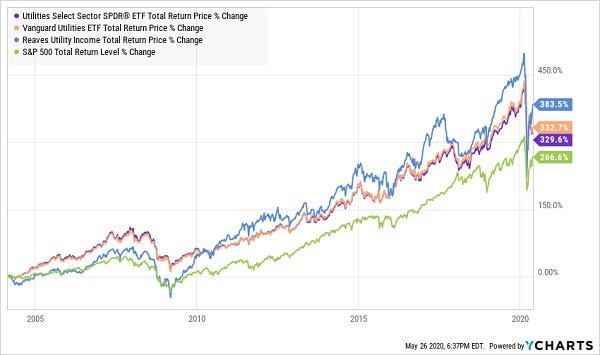 But if you buy UTG, you need to be in it for the long haul. It tends to be more volatile than basic index ETFs in the short-term because of its use of leverage. However, it’s positioned to squeeze maximum returns out of any long bull market in utility stocks.

5 “Recession-Resistant” Stocks Paying Up to 13%

The fact that you’re reading about utility stocks right now means your “investing brain” is in the right place.

A recession is coming. In fact, it’s almost certainly here already. U.S. GDP shrank by 4.8% during the first quarter, and Goldman Sachs believes that the American economy will contract by a brain-melting 40% this quarter.

The current bear-market rally can’t stop that. And it won’t take much—reality setting in that many of the 36 million lost jobs won’t reappear overnight, a revived trade war with China, or another exogenic shock—to topple this house of cards.

In this kind of investing environment, you need safe, substantial income you can actually count on.

And you can find that in my “Recession-Resistant Dividends.”

You might be tempted to buy just about any stock on another broad-market dip. But don’t get lured into cheap stocks when you should be buying values.

My five recession-proof stocks are monster yielders that offer:

Ask yourself this: How many sturdy investments do you know that will pay you nearly $50,000 in annual cash dividends on a half-million-dollar investment?

They’re uncommon. And payouts that high that you can actually count on are downright rare. But sure enough, these five recession plays offer built-in upside, downside insurance and 9.4% average dividends.

These unicorn stocks are a “Goldilocks” scenario: They’re too small to draw interest from institutional investors or the traditional financial media giants. But they’re plenty liquid enough for you and I to get exactly the price we want, and not a penny more.

Don’t wait around while your current holdings start hemorrhaging their dividends and buybacks and give up even more ground. Do what’s right for your retirement and fund it with stocks paying an average 9.4% yield that will grow even larger over time.

Click here to get these five “Recession-Resistant Dividends,” including company names, stock tickers, buy-up-to prices and my in-depth analysis—and protect your portfolio from Wall Street’s bout of wealth destruction!