5 Retail Dividends with an Amazon-Proof Story Paying Up to 10.4%

“Brett, I bought something for the girls. From Carter’s. Let me know when you get it.”

My mom thinks that postal delivery is a 50-50 proposition. She hedges her downside by purchasing 4X as many clothes as my young daughters actually need!

“Mom – thanks. Will do. And, you know, they’re probably good on dresses for now. They’ll be up another size in a few months.”

“Oh don’t you worry about that. I’ve got plenty of coupons,” she countered.

My folks live 2,562 miles from their granddaughters. And while long-distance grandparenting can be a challenge, the (increasingly online) experience provided by Carter’s (CRI) satisfies two of my mom’s favorite pastimes:

As much as I appreciate the wardrobe help, the reason you and I are discussing infant and toddler clothing today is that these purchases are powering remarkable payout growth.

In 2018, every “brick and mortar” business must have an “Amazon story” to explain why it won’t be eaten up. A few sentences explaining – succinctly and convincingly – why the firm won’t be swallowed alive by Amazon.com (AMZN) in the years ahead.

Our favorite retail stocks tend to be, well, hidden from Jeff Bezos’ view. The legendary CEO has different investing criteria from you and me. He needs to make big bets. His firm, after all, is Amazonian – it takes large splashes to move his sales tide higher.

So while he’s busy mowing down the mainstream retail landscape, there are many niche retailers who will not only survive, but even thrive as e-commerce continues to boom in the years ahead. And they will all share two important characteristics:

This is what failing department stores like Macy’s (M) are missing. You walk into the store, you pay and you walk out. Their main sales interaction is purely transactional.

And in 2018, transactional is not enough. Firms built to sell in the decade ahead also have:

They have a website that is “grandma friendly” to take orders directly. They have a mobile app on their customers’ smartphones – which they can use to buy more stuff from. They have an email address so that they can advertise the next sale.

And they have friendly service reps who will take the phone call when a package is late or missing – which will assure the customer will continue to buy direct from them instead of a black box like Amazon.

I love a handful of retail stocks right now, but I’m also concerned about a couple high-yield bets that are at risk of being “Bezos’d.” Let’s look at these five retail stocks yielding up to 10.4% and separate the winners from the losers.

Best Buy (BBY) is the little engine that wouldn’t die. Market pundits left this retailer for dead years ago, thinking it couldn’t possibly survive the war on two fronts – big-box retailers Walmart (WMT) and Target (TGT) on the left, and Amazon on the right.

But CEO Hubert Joly – acting almost like a photo negative of Sears’ Eddie Lampert – focused on improving the quality of stores, and used employee expertise to help battle the “showrooming” phenomenon that many believed would sink Best Buy. The result? A return to growth on the top and bottom lines.

Best Buy is going “low-tech” in a grab at Toys ‘R’ Us’ customers, announcing it will expand its toy inventory in 1,000 stores this holiday season. Adding Nerf guns and Hatchimals is actually somewhat of a natural fit for BBY, which already sells the likes of video games and drones.

And investors have to love what Best Buy is doing on the income front. Joly has really put the pedal down on the payout, rewarding faithful investors with a 21% dividend hike in 2017 and a whopping 32% payout increase announced in March of this year. 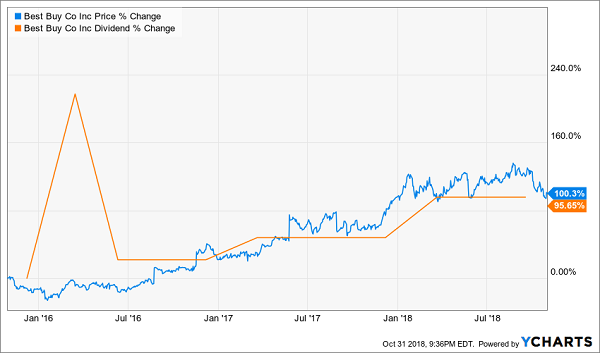 L Brands (LB), the company behind iconic brands Victoria’s Secret and Bath & Body Works, has a dividend yield that puts most of the retail sector to shame.

And that’s about it.

L Brands’ high yield is entirely a result of its bleeding shares, which have nearly halved in value this year. The dividend hasn’t budged for years, in large part because of shrinking profits as its brands lose their luster, especially among increasingly important Millennial wallets. The formerly premium-priced lingerie dealer has been forced to slash prices to compete, cramping margins and eroding its once prestigious brand. It also has been forced to put the ax to Henri Bendel, finishing off the fashion brand after 123 years of operations “to improve company profitability and focus on our larger brands that have greater growth potential.”

The company’s second-quarter report made income investors do a double-take. L Brands significantly stepped down its full-year profit guidance, from $2.70-$3.00 to $2.45-$2.70. See, LB pays out $2.40 annually in dividends, so it would barely be covering its payout if profits come in at the low end of guidance. A special dividend – a pretty regular occurrence at L Brands – is almost certainly out of the question this year.

Don’t expect the Christmas season to turn around the long-term decay here, but do start expecting a dividend cut in the next couple years.

What’s an industrial real estate investment trust (REIT) got to do with the holiday season?

Everything, when you’re talking about Amazon’s largest landlord.

Prologis (PLD) is a warehouse-focused REIT that boasts 771 million square feet across 3,742 buildings in 19 countries on four continents.

The shift to e-commerce directly benefits Prologis, whose properties are increasingly necessary for any retailer shifting their goods from brick-and-mortar stores to warehouses, where they’ll sit until delivery. And this is a rapid shift, with the company and Goldman Sachs estimating 152% projected growth of e-commerce sales between 2015 and 2020. 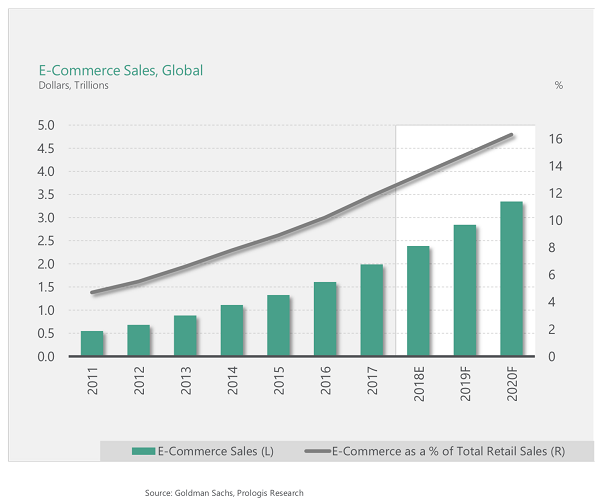 You can see this potential in Prologis’ tenant lineup. Amazon is a major presence, at 16 million square feet as of last year, and Walmart and Best Buy are among other retail customers. But other major tenants include delivery companies such as UPS (UPS), FedEx (FDX) and DHL – more e-commerce beneficiaries.

Prologis has its hand in a lot of other pies, too – 5,500 customers, to be specific, also including companies such as BMW, PepsiCo (PEP) and even the U.S. government.

The REIT doubled down on its opportunity earlier this year when it acquired rival DCT Industrial Trust for $8.4 billion, adding 71 million square feet of space on the East and West Coasts. That, and Americans’ growing love affair with online ordering, makes it all the more likely that PLD will continue growing both its bottom line and its dividend, which have been exploding for years. 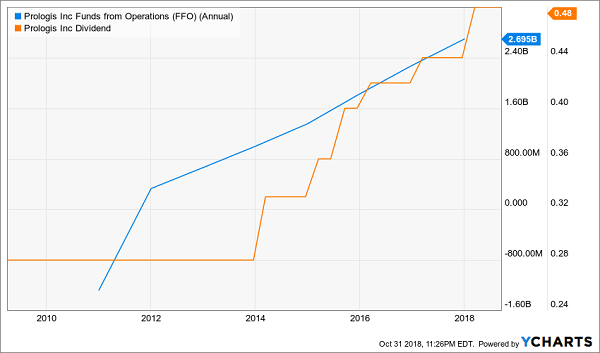 GameStop (GME) would seemingly have it made right now. The Nintendo (NTDOY) Switch is selling like hotcakes, Sony’s (SNE) early-year PlayStation 4 sales were ahead of projections and NPD Group says Xbox One sales have doubled from 2017. Take-Two Interactive’s (TTWO) Red Dead Redemption 2 did $725 million retail in just three days, prompting the company to call it “the single-biggest opening weekend in the history of entertainment,” as it actually beat out Disney’s (DIS) Avengers: Infinity War’s opening-weekend box office.

The company’s last quarterly results, out in September, included smaller revenues and a net loss of $24.9 million that was wider than the year-ago period; adjusted profits of 8 cents per share missed the mark, too. All told, sales should decline 2% to 6% this year.

GME is still making enough of a profit to comfortably cover its dividend, by almost double. But management tipped its hand at its own problems earlier this year by keeping the payout flat after years of token improvements.

This is ominous. If GameStop can’t catch a break while console sales are red-hot, it’s going to be staring at an enormous problem when the console cycle slows down again, and as more game purchases are done online.

Packaging Corporation of America (PKG) is another non-retailer that you can nonetheless leverage to profit off the rise of e-commerce.

Packaging Corp offers a laundry list of solutions, from corrugated containers to retail packaging and displays to storage boxes to packaging supplies and so, so much more. And if all of that sounds like the kind of products that are going to be in high demand during the busiest time of the year for online retailers … that’s because it is. However, PKG also has a robust industrial operation that means its growth isn’t wholly dependent on the boom in e-commerce.

Boxes Are a Booming Business. Who Knew? 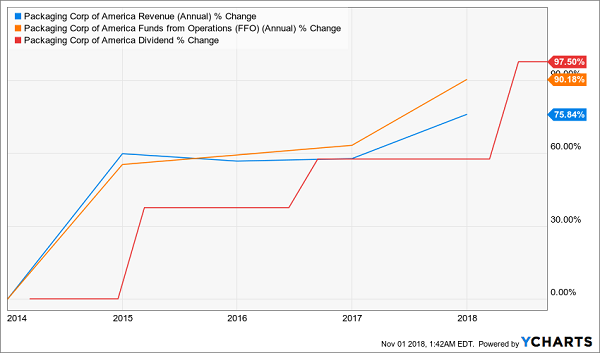 What’s even more outstanding: Even though the dividend has almost doubled since 2004, the company has paid out just $2.21 per share through the first nine months of this year, against a $5.64 profit – a 39% payout ratio. That means PKG can keep throttling ahead with aggressive dividend hikes going forward while still being able to spend what it needs to spark continued business growth, too.

You need safe, substantial yields in this nauseating market. The problem is, retail mostly offers one or the other – safe but modest yields, or gigantic dividends that are a couple years away from imploding.

That desperate need for safety is what has many investors clinging on to dear life in slow-growth stocks like consumer staples Coca-Cola (KO) and Procter & Gamble (PG). Sure, they feel like a security blanket when the market declines, but they’ve been long-term underperformers with no change in sight.

You can do better than the ho-hum yields and lousy price gains in these sleepy blue chips. Much better.

In fact, I haven’t been this excited about an income opportunity in years.

What if I told you that you could turn growth dynamos such as Visa (V) and Google-parent Alphabet (GOOGL), into “double threat” holdings that deliver not just double-digit upside, but dividends north of 8%? Well, you’d probably call me nuts, given that Visa pays less than 1% and Sergey Brin would laugh you out of the room if you suggested Google pay out a dividend.

But you’d change your tune the moment you saw my new discovery: “Dividend Conversion Machines.”