Can you explain GameStop (GME) stock to me?

My buddy who texted isn’t usually into stocks. They are too quaint for him—heck, bitcoin has become too mainstream for him. Something was up.

Sure enough, I checked the GME chart, and whoa! What a move. And that was before last week’s moonshot, which propelled the stock to insane 1,000%+ month-to-date gains.

GME became famous on a website called Reddit, which lets users banter about common interests. Its financial-focused wallstreetbets board has been given credit for coordinating the GME buying and subsequent moonshot.

Which, as far as I can tell, is true. But it’s important to note that the money managers who lost their fortunes in the trade have only themselves to blame.

When someone sells a stock short, he or she must sell shares now in hopes of buying them back later. Really, they are taking out a loan for the shares (borrowing money) to put on the trade. 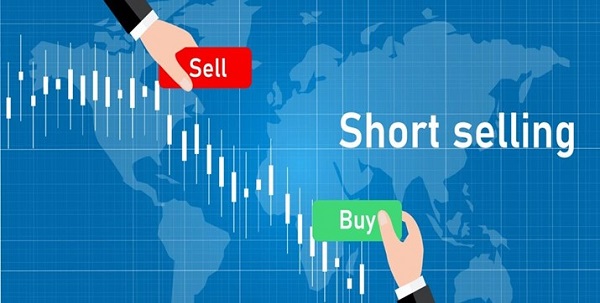 When we buy stocks outright, the most money we can lose is what we paid for the position. And there is theoretically no limit to the amount of money we can make, if the shares we purchased continue higher and higher. The risk versus reward is in our favor.

Shorting has the opposite skew. When we short a stock, the most we can make is the amount that we borrow to put on the trade. A “perfect” short trade would have a stock drop all of the way to zero.

This is what short sellers in GME were hoping for. But they got more than they bargained for.

When the kids on Reddit banded together and bought shares, the price began to climb. Some shorts bailed (and bought back their shares). The price climbed more. Which, in turn, brought in more buyers from the Reddit boards. And forced more shorts to bail (they too became buyers). And so on. All buyers and no sellers, for days on end.

It was a good old-fashioned “short squeeze.” And there was plenty of tinder on hand heading into the fireworks. More than 100% of GME’s outstanding shares were sold short!

When the stock price began to take off, this crowd of bears had an increasingly unpleasant decision to ponder. Can we survive this squeeze, or must we sell and book tremendous losses? And it was so painful because, again, shorting is done with borrowed money and the potential losses are unlimited.

Back to GME. Can you imagine having “locked in” the right to sell GME at $18? Or $10? Or $5? These short sellers thought they had a sure bet, with an “old school” video game company (that sells CDs!) likely to head to $0. 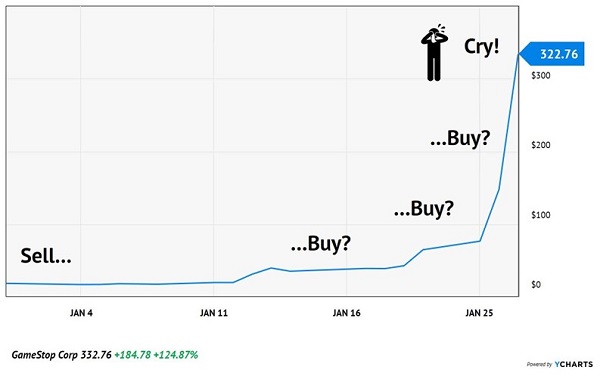 The hedge funds make themselves easy marks for the millennial message boarders on Reddit. Collectively, they were short more than 100% of the outstanding shares for GME. In industry terms, the short interest was >100%, so all it would take to cause a short squeeze and price spike would be… a lot of people buying at once!

So, let’s give these kids credit. They know GME is fundamentally flawed. But they know what “short interest” and “short squeeze” mean. They recognized that a bit of buying would force a tough decision for the shorts, who couldn’t all fit through the exit at once.

Worse (for the funds), or hilariously (for the buyers), many of the shorts were forced to cover by their risk management policies. Surely designed for “rational” markets, the rules they had in place to limit large losses like these. Which means these fund managers didn’t even have the option to hang on and hope for GME’s price to return to this planet.

As the price kept rising, the shorts kept having to cover (buy back their shares), which further perpetuated this rally.

So how does this entertaining headline story relate to us? As contrarian buyers of stocks, we like to see short bets against the shares we’re purchasing. First, it shows broader pessimism towards the shares, supporting our variant perception. Second, each share sold short must be “bought back” down the road.

High short interest when I’m on the buy side? Bring it on. On the other hand, I rarely short stocks, but when I do, I look for low “short interest” in the shares. The percentage of shares sold short should be in the single digits. Like a football stadium during Covid times, I don’t want to sit near anyone when I’m on the short side of a trade.

The GME short trade was the super-spreader event of the year, at least as far as short contagion was concerned. With more than 100% of shares sold short, the entire stock had been borrowed more than once over. Any nudge on the bullish side had the potential to send the stock soaring.

Now, short sellers don’t venture into our merry land of dividends very often. To play here, and bet against our payers, they are instantly on the hook for dividend payments. (Remember, they are borrowing shares—so they must pony up for, not receive, the payouts.)

It takes moxie, an errant thesis, or a combination of both to bet against a dividend paying stock. We welcomed these pessimists when we added shares of Chemours (CC) to our Contrarian Income Report portfolio in June.

CC’s percentage of short interest peaked above 10% this spring. That was a huge number for a stock with a 7.4% yield. Can you imagine borrowing at a 7.4% interest rate for the right to bet against a stock? That’s what you were doing if you shorted CC, because you would have to pay the dividend, not pocket it as when you’re on the buy side!

The short sellers were wagering on an overhang of potential litigation against CC. But we recognized these fears as overblown when company Chief Operating Officer (COO) Mark Newman bought another 2,500 shares in May.

As it became clear that the CC shorts were wrong, they began to lose their shorts. Each share they “bought back” helped nudge CC higher. Plus, we collected the fat quarterly dividend alongside Mark as we enjoyed 69% total returns since June: 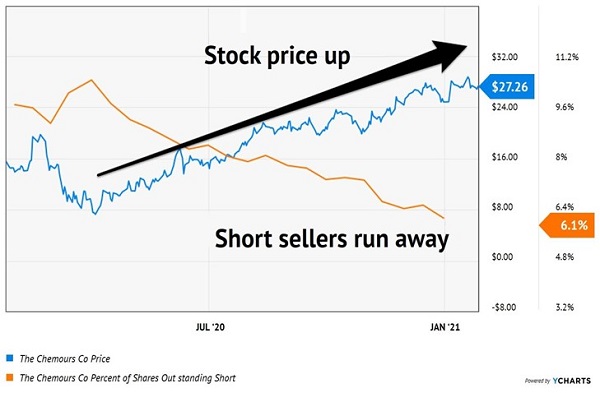 If you participated in this trade, you may be thinking: “That was fun! Let’s do it again!” (It’s a familiar refrain around my house when daddy delivers a solid “horsey ride” for one of the kids. A level of success that wears on the old knees.)

Like GME, many of these stocks have poor fundamental outlooks. But that doesn’t mean some sudden buying can’t power a “short pop.”

Macerich (MAC) has already had a mini run on the message boards in recent weeks, in fact. The stock soared from under $7 to $22.38. But squeezes don’t last forever, and shares have already settled back down to $14.

B&G Foods (BGS) is intriguing, especially if this whole “vaccine thing” doesn’t quite work out as hoped. If you’re a Dividend Swing Trader subscriber, you smiled when you heard the name.

When we traded BGS in our DST service this summer, it was a 6%+ yielding stock that was capitalizing on the dine-at-home trend across America. The pantry and freezer were back in because fresh produce required that daunting trip to the grocery store.

BGS had had a rough five years, but 2020 revived the firm’s offerings. Ironically, its lack of innovation positioned the company perfectly for the dine-at-home craze, and investors realized this, chasing the shorts out. We benefited from this action, posting a 14% gain in just five months.

With 2021 looking like a “dine out” year, the shorts are back on this stock. While I wouldn’t buy BGS and hope for an Internet mention, we should keep an eye on it as a potential trade. If the dine-at-home trend remains stubbornly in place, the catalyst that made Green Giant Peas suddenly flavorful from an income perspective could squeeze some extra price upside.

It’s like we discussed last week with breakfast beers—there’s a time and a place to trade these highly-shorted dividend stocks. We contrarian income seekers look for them before they’ve hit the front page of the Wall Street Journal. Or, in 2021 parlance, before reaching “Internet legend” status.

My favorite seven dividend stocks to buy right now are poised to deliver 15% returns per year, every year.

Perhaps they will be the focus of an upcoming Reddit thread. While modestly shorted, these seven stocks are the definition of recession-proof and should keep rolling higher in tandem with their explosive dividend growth. Click here and I’ll share my 7 “Hidden Yield” stocks with you.