How much money do you need to retire on dividends alone?

This is a better question to ask than the typical “magic number” formula that most “first-level” thinking firms tout. Let’s review why their approach is fatally flawed, so that we can derive a more reliable method of our own based in actual reality (and funded by actual dividend payments.)

“You should aim to have 10 times your final salary in savings.”

Buy why? I suppose they are claiming that, if you earned $100,000 in your final year working, that you’ll want to earn this much in income every year for the rest of your life.

So, Fidelity says save a million bucks and you’re in good shape.

Fidelity’s Strategic Dividend & Income Fund (FSDIX) pays 2.45% today. Which means, if you follow their advice to a tee, and buy their flagship income fund, you are earning $24,500 per year in income from your million-dollar stake.

That’s a start. But where exactly is the other 75.5% of your income supposed to come from?

Fade the 4% Fallacy for a Smarter “Magic Dividend Number”

Our retirement approach is grounded in reality versus fantasy and false math. So, let’s begin with the value of your actual portfolio.

Back to the $1 million example. Let’s say we saved that money like Fidelity said to, and we still want $100,000 per year.

We’ll ditch the flawed notion of selling capital for income, and live on dividends alone. This means our portfolio’s “magic yield” is 10% annually.

So, we’re faced with a decision. We can:

There’s actually a third, superior option – earn more yield on your money. I’ll show you how to bank 6%, 7% and even 8% yields with less risk than buying a blue chip stock. 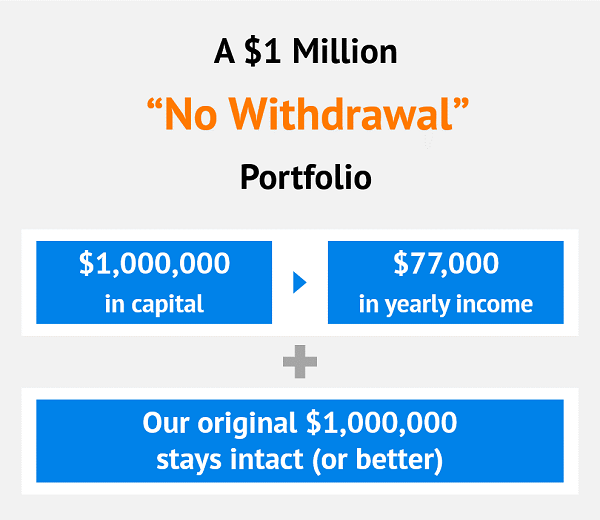 First let’s look at four of these “flawed dividend payers” that simply don’t pay enough (or have sufficient growth prospects) to belong in any retirement portfolio. If you own any of these stocks, I would recommend selling them and replacing them with the higher paying ideas we’ll soon discuss.

Back in September 2017, I called out global foods blue-chip Mondelez (MDLZ) as one of several renowned dividend payers to sell.

And Here’s What Mondelez Has Done Since Then 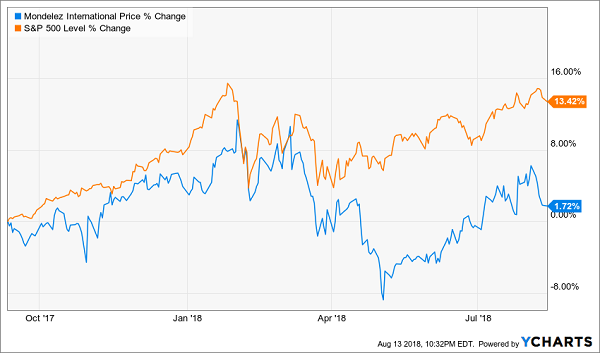 If you didn’t heed my advice then, here’s your second chance.

At a glance, Mondelez would seem to be doing well. Earnings are expected to grow by about 13% this year, and a decent 7% next, and MDLZ beat profit estimates in its most recent report.

Better still, Mondelez is cranking out some nice dividend hikes, including a 13% payout raise announced in July.

But if you look under the surface, the math starts to get ugly. Specifically, that dividend growth is running laps around earnings growth – it’s not even close. 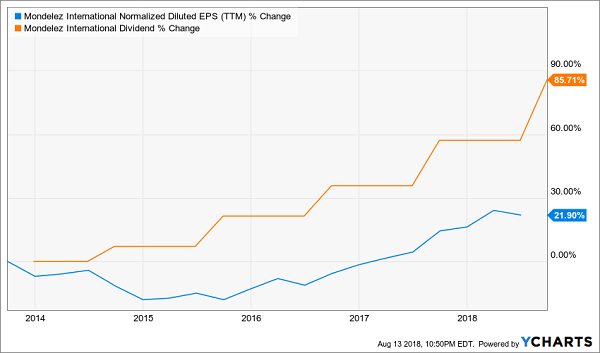 Also, Mondelez’s bottom-line growth is being built on balsa-wood stilts. While earnings growth projections for the next couple years are nice, revenues are projected to climb less than 2% annually this year and next.

MDLZ has traded flat for almost three years now, and while it might pick up in the short-term, I have serious concerns about its ability to produce for retirement investors over the next decade-plus.

Hershey (HSY) is an American classic and one of the foremost names in chocolate. Brands including its namesake chocolate, not to mention Kisses, Reese’s, KitKat, York, Jolly Rancher, Twizzlers and Bubble Yum.

In fact, candy and gum is all Hershey does … and that’s a problem.

The company is coming up against major headwinds here in the U.S., where sugar is increasingly getting the tobacco treatment. Obesity and diabetes have exploded in American, and companies dealing heavily in sugary products are feeling the pinch. Coca-Cola’s (KO) and PepsiCo’s (PEP) primary products are being directly targeted by soda taxes across the nation, but health-consciousness is also directing Americans away from the candy aisle.

“Chocolate confectionery, and by extension of cocoa’s plight, does not look set to improve, with our forecast figures suggesting a volume decline of 1% between 2016 and 2021,” says Euromonitor Ingredients Analyst John George. And the U.S. market is expected to grow more slowly compared to the global market.

Hershey’s top line has moved ahead, albeit at a glacial pace, and profits are actually down from where they were back in 2014. Shares have been understandably flat over that time – and that bodes poorly for HSY going forward considering top-line growth is expected to slow to a mere 1.4% next year. 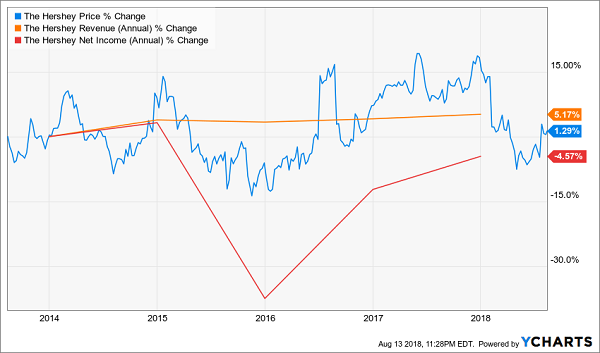 “All indicators tell us that we have reached peak market and it won’t be getting any better from here.”

This statement from Cox Automotive Senior Economist Charlies Chesbrough, ironically made amid a slight upgrade to the company’s expectations for 2018 auto sales, tells you much about the perils of investing in the automotive industry right now.

That even goes for General Motors (GM), the Little Value That Could … But Never Did.

Automakers have been an infuriating industry for years, sporting eye-poppingly cheap prices but never really achieving their “value” potential. Consider the P/Es in the space right now:

This isn’t some odd anomaly. P/Es have been this depressed for quite some time. And the yields have only gotten plumper. 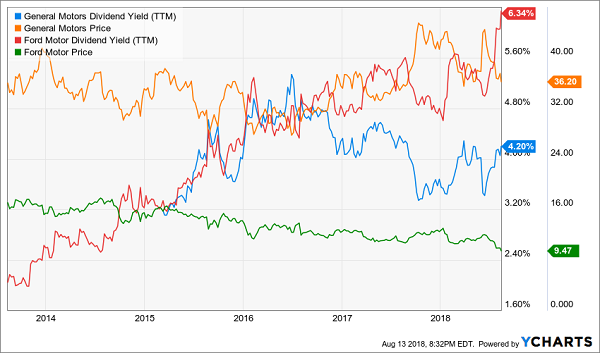 Ford, which has been pummeled by 40% in the same time, throws off dividends like a telecom, yielding a fat 6%. Even GM, which has traded flat for five years now but keeps growing its dividend, yields an ample 4%.

But that’s the problem. If you buy into General Motors, you’re buying into a value trap – one that has dug its claws into investors for years, and is primed to continue doing so. GM is standing still in a declining industry. Wall Street expects a slight revenue decline this year and a marginal uptick in 2019. Worse, over the next two years, profits are expected to decline 8% from 2017 levels.

Give up on the GM “long game.” Everybody loses.

I beat up on Procter & Gamble (PG) on occasion, and that’s because it truly is a dangerous blue-chip stock.

I get the allure. I do. The company deals in consumer staples such as toilet paper, razors, laundry detergent and soap – products you simply need to buy no matter what the economy is doing. And it’s the dominant force in so many of the fields it’s in, boasting 23 billion-dollar brands, most of which hold the No. 1 or No. 2 position in their category.

It’s a juggernaut … but it’s also not invincible, and the cracks in its armor are becoming increasingly more evident.

Stifel analysts warned, “Overall we view the [third quarter] result as disappointing and suggestive the company continues to lose share in the majority of markets/categories, with prestige beauty brand SK-II accounting for the majority of growth,” following the company’s Q1 earnings report in April. Then in July, P&G produced a revenue miss for Q2, with several of its brands – especially its Gillette razors – suffering at the hands of lower-priced and generic brands. And activist Nelson Peltz, who won a seat on Procter & Gamble’s board, is increasingly making headway into convincing the company to restructure.

As if that wasn’t enough, the company has an Amazon.com (AMZN) problem. I’ve previously written that the e-tailer, which once was viewed as a potential boon for P&G, is a growing threat to this consumer staples giant.

And while Procter & Gamble is indeed a Dividend Aristocrat boasting 62 consecutive annual dividend increases, that growth is slowing to a crawl, at less than 4% annually over the past half-decade.

Without Meaningful Growth, P&G Is a Gamble 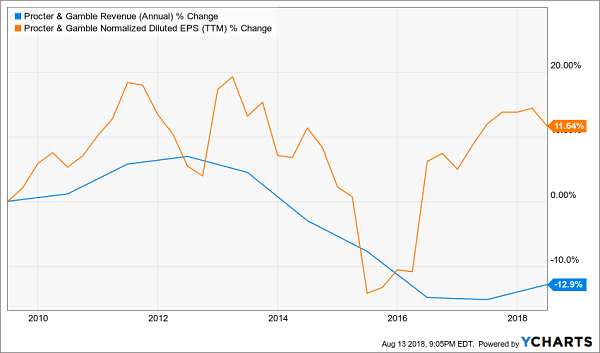 How to Earn 4x the Market’s Dividends Forever

The math is pretty simple: $18,000 from the S&P 500 or $29,000 from “high-yield” blue chips, even when combined with Social Security money, will barely be enough to cover your monthly expenses.

Low cash flow like that will force you to claw away at your nest egg year after year just to make ends meet. And every time you do that, you slash your annual income potential, which means you’ll have to sell off even more the following year!

But $80,000 in annual income from dividends alone? That’s a retirement you can look forward to – and that’s the kind of retirement you’ll enjoy with the picks in my “8% No Withdrawal Portfolio”!

This high-yield, retirement-focused portfolio features a number of income dynamos that not only more than double or triple the dividends of the stocks we just discussed, but also have the potential for 25%-plus upside thanks to their bargain valuations!

That extra income is vital to the quality of your retirement years. Every additional dollar in annual income is another dollar you don’t have to take out of your portfolio – which means it can sit around generating dividends and growing your nest egg so it’s there when you really need it.

My 8% No Withdrawal Portfolio not only includes these can’t-miss bargain picks, but also a few free bonus reports that include:

I know – it’s hard to ditch stocks that seem so safe. But there’s nothing “safe” about locking in sub-par returns for decades and ultimately coming up way short by the time you retire. You’ve busted your hump for the retirement you deserve – so invest in the high-yield companies that will ensure you get there. Click here to get my free “8% No Withdrawal Portfolio” and four FREE special reports – complete with names, tickers and buy prices!