Where are you going to find meaningful income to get you through retirement? Not from popular stocks, with the S&P paying less than 2%. And bonds won’t help either, as their yields are in the tank, too.

Instead let’s consider real estate investment trusts (REITs), which are tailor-made for investors who are at or nearing retirement. Specifically, I’d look to dividend-growing REITs, like the three I’m about to show you. This trio of landlords are on pace to double their dividends in just four years.

How Dividend Growth Can Quickly Double Your Money

Respected healthcare REIT Ventas (VTR) is the perfect example of how this strategy can do more than provide income. Heck, it can make you as rich as you always wanted to be!

Ventas–which invests in all sorts of properties, from senior care to medical offices to even research facilities–is the second-largest such REIT on the market. It’s also one of the most underappreciated growth stories on Wall Street. In its 2001 annual report, Ventas boasted 268 properties across its portfolio; today, it’s a healthcare juggernaut with more than 1,200.

The stock has behaved exactly like you would imagine. Since the start of 2002, the S&P 500 has put together a 267% total return. Ventas? Almost 10 times that, at 2,310% returns when you include both price gains and dividends!

Ventas Has Run Circles Around the Market 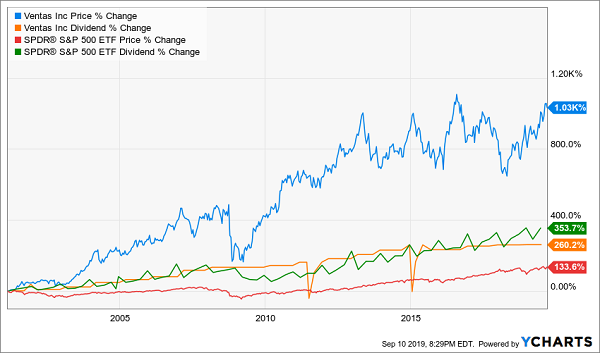 But it wasn’t just about the growth. Booming profits fueled a virtuous cycle. Yes, some investors bought in for upside potential. But others were drawn to a rapidly growing dividend that at one point doubled in a five-year span.

As Dividend Growth Slows, So Too Does Ventas 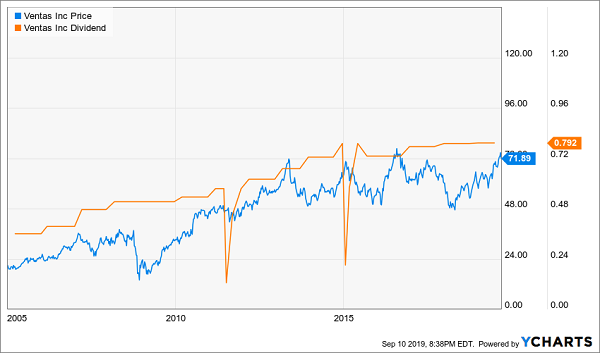 Funds from operations (FFO) growth has slowed in recent years, and even declined in 2018. The once spry dividend has grown just 9% in total over the past five years, including a mere 0.3% hike this year.

Flagging Dividends Are a Red Flag

Public Storage (PSA) also shows both stages of the dividend-growth coin. From 2009 through 2016, Public Storage–the premier name in self-storage real estate–could do no wrong. The entire self-storage industry was blossoming. Management couldn’t hurl cash at shareholders fast enough. The payout more than tripled during this period, and unsurprisingly, that’s exactly what the stock did. 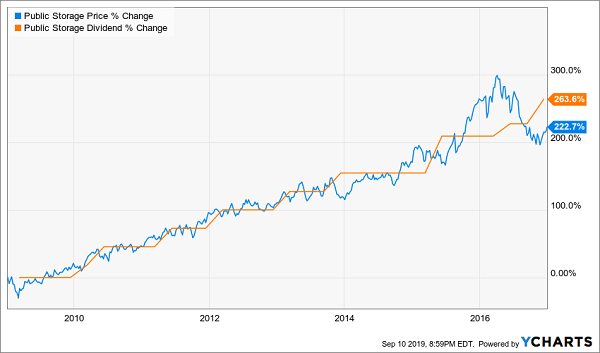 But, like with Ventas, shareholders have greeted a slowdown in the payout with diminished enthusiasm. Indeed, Public Storage hasn’t touched the dividend since raising it in the final quarter of 2016, and PSA has barely stumbled ahead with subpar three-year returns.

Investors Have Cooled on PSA 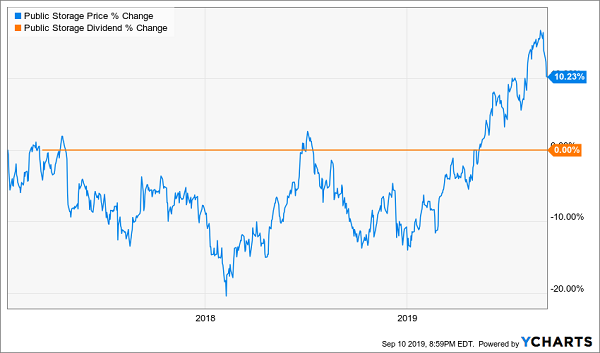 Like the S&P 500, REITs boast a small group of Aristocrat-esque payers that have upped the ante on their dividends every year for at least a quarter-century. They’re good companies with respectable stocks, but they’re not the first place we should look to for dividend growth, because that dividend growth has slowed to a crawl.

Again, we want stocks that look like the VTRs and PSAs of yesteryear, with relatively young but aggressive payout histories—and I have three that fit the bill. Just look at this trio’s dividend growth, which is absolutely boat-racing the “REIT Aristocrats”:

These young guns’ payouts are expanding at more than three times the rate of REIT royalty like Realty Income (O) and Federal Realty Investment Trust (FRT).

And if they can keep this momentum going, they’ll double their dividends in four to five years. And when payouts increase by 100% or more, so do the stock prices attached to them.

Extra Space Storage (EXR) is picking up where Public Storage left off. There’s plenty to love about the self-storage space, even now that it’s starting to mature. But perhaps its best quality is that it’s economically indifferent.

Is the economy booming? Great! Americans are going to buy, buy, buy, until there’s no more room left in their homes, necessitating self-storage units. Is the economy tanking? That’s fine by the likes of Extra Space Storage. Because when Americans downsize, they’re not going to want to part with all their things – so they’ll pay a few bucks a month to keep it stored until conditions improve.

As for EXR itself: It’s the second-largest self-storage operator in the U.S., and it’s gained its size by simply hoovering smaller competitors. The company has spent almost $1 billion a year over the past half-decade making acquisitions to grow its empire.

Yet somehow, there are profits left over for dividend hikes. Plenty, in fact. EXR has juiced its payout by more than 90% since 2014. Shares have actually managed to outstrip that dividend growth. 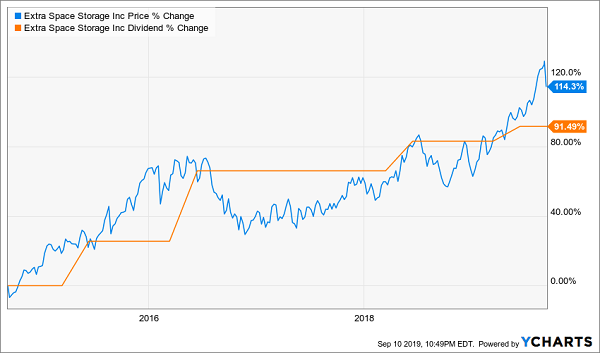 Extra Space’s current FFO payout ratio is just 73%, leaving a ton of cushion for more rate hikes by typical REIT standards. I will point out, however, that dividend growth has begun to slow over the past couple years, dragging down its average. But even if EXR “normalizes” to rate hikes like its 10% bump in 2018, that’ll send a strong buy signal to shareholders.

Terreno Realty (TRNO) is an option for retirement investors who want to get in near the ground floor. This industrial real estate player focuses on coastal markets such as L.A., Miami and Washington, D.C. It’s a relatively young REIT that got its start as a 2010 “blank check” IPO–a weak offering that was cut twice before finally hitting the markets.

No wonder, given this cloud of mystery surrounding the company (via Reuters):

“It said in a regulatory filing with the U.S. Securities and Exchange Commission that it has no operating history and has not yet identified any acquisitions, or committed any portion of the proceeds to such acquisitions … It also said it may change its business, investment, leverage and strategies without stockholder approval.”

Terreno is the definition of a “show me” stock. Well, here’s what the REIT has shown so far: 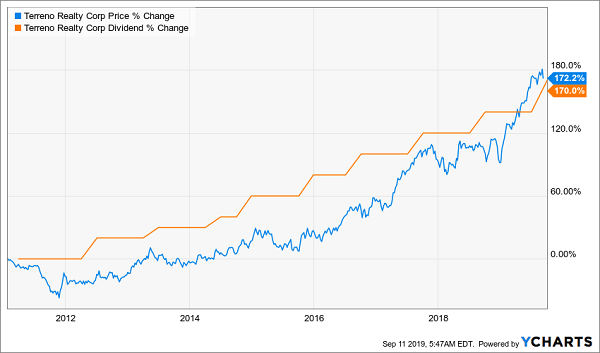 Terreno is doing all the things you want to see in a young REIT. It’s highly acquisitive, making about $220 million worth of deals in 2018 (the company itself is worth just $3 billion). Cash rents on new and renewed leases shot up 19.2% year-over-year in 2018. FFO surged 19%.

My only concern is that 2019 growth has cooled a little bit. FFO from the first six months of 2019 has come in flat compared to last year’s midway point.

Still, Terreno seems to have faith in its prospects. The REIT ramped up its payout by 12.5% at the end of July, and it’s still only paying out 74% of its FFO via the distribution–ample firepower for more.

I’ve previously highlighted the dividend prowess of telecom infrastructure REIT Crown Castle International (CCI), which has more than tripled its payout over the past half-decade. But there’s another aspect of the story that’s important to CCI’s dividend-growth future:

That payout is young.

You see, Crown Castle went public in 1998, but it didn’t start paying dividends until 2014 – the year it converted to a REIT structure. And unlike many untested things, young dividends tend to be awfully safe, because the company is only really starting to dip its toe into profits to pay it out.

You can see it all over Wall Street. Consider the first five years of relatively recent dividend payers Cisco Systems (CSCO), Starbucks (SBUX) and Expedia (EXPE). They doubled (and in Cisco’s case) tripled their quarterly dividends within five years and had oodles of room to spare. 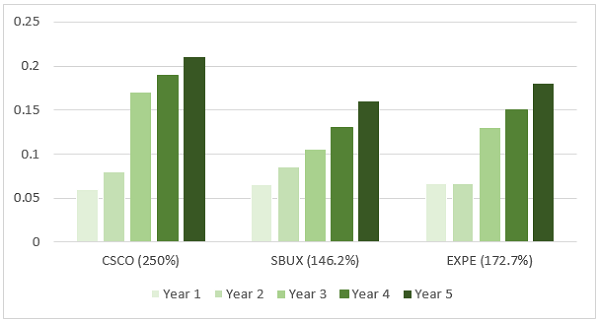 Meanwhile, Crown Castle is paying out just 77% of FFO as dividends, which again is extremely low by REIT standards. And FFO growth seems a lock too, given the importance of telecom to everyday life, not to mention the continued rollout of new technologies such as 5G.

Those two factors combined should help Crown easily reach its stated target of 7%-8% annual dividend growth, if not exceed it.

This “Perfect” Portfolio Will Quadruple Your Retirement Income

I see potential in each of three dividend payers above. But there’s one vital factor that retirement planners–especially those close to or already in retirement–desperately need that they don’t have:

Even at their breathtaking dividend-growth rates, it could take each of these stocks anywhere between four and 10 years to hit the kind of payouts you need to sustain your lifestyle with dividend income and without decimating your nest egg.

You need stocks that already fit the bill, like the dividend dynamos in my “Perfect Income Portfolio.”

The old retirement model is broken. The vast majority of so-called income experts frequently point to 2%- to 3%-yielding blue-chip stocks that will never pay the amount of money you need! In fact, unless you’re sitting on a massive pile of cash (or you’re willing to wait 30, 40, or 50+ years) it’s mathematically impossible for you to retire rich, wealthy and financially free by following their outdated advice.

Times have changed. You need far more income, for far longer, than people needed 20 or 30 years ago.

My “Perfect Income Portfolio” can deliver exactly that. In fact, if your current holdings look like the industry standard, this portfolio can literally double, triple or in some cases quadruple your annual income.

No tricks. No crazy options techniques that will blow up in your face overnight.

Just under-the-radar, against-the-radar income plays that can quickly build your wealth without piling on extra risk.

Too good to be true? Look at this strategy’s past 10 years of returns, and you’ll see why this portfolio deserves the “perfect” name: