One of the best characteristics about dividends is they usually offer a consistent, preferably growing stream of income. However, investors can easily fall into the trap of becoming complacent that future payments will continue to flow in, even when the business isn’t generating enough cash to fund the dividend.

The higher the yield being offered generally means the riskier the dividend is and sometimes losses can outweigh the expected income. For example, Dynagas LNG Partners (DLNG) cut its 16% yield back in April and shares are down 24% since.

With government bonds paying around 2% to 3%, dividends above 10% need to be scrutinized closely and I’ve identified two that are in danger of disappearing.

Dangerous Dividend No. 1: Legacy Investments Could Smother the Dividend 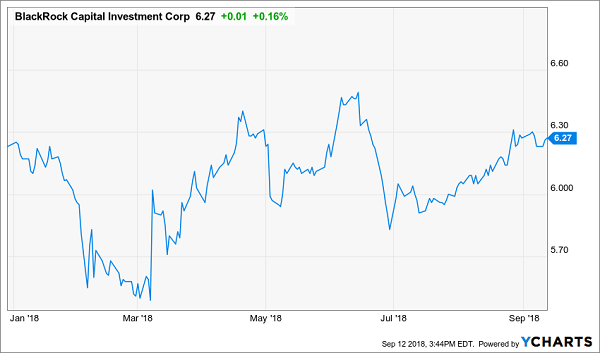 Blackrock Capital Investment (BKCC) is a business development company (BDC) that is trading below its net asset value, which generally signals a potential buying opportunity. That said, the company’s portfolio includes legacy investments that are a wet blanket and could smother the 11.5% dividend yield.

Blackrock Capital generated net operating income (NOI) of just $0.16 a share in the second quarter, which was not enough to cover the quarterly dividend of $0.18. In fact, management has failed to generate enough NOI to pay the dividend four of the past five quarters.

The company’s net asset value actually fell during the period, as management had to write down legacy investments in the industrials, insurance and metals businesses.

Another red flag for Blackrock Capital is the current leadership vacuum in the C-suite. The company has been without a full time CEO since April and its interim CFO has been “filling in” for 11 months now.

Blackrock Capital’s bonds are currently rated BBB- by the major agencies, which is last level before reaching junk status. Debt investors will demand their interest before any dividends are paid and the next management team may have to sacrifice its payout if push comes to shove. 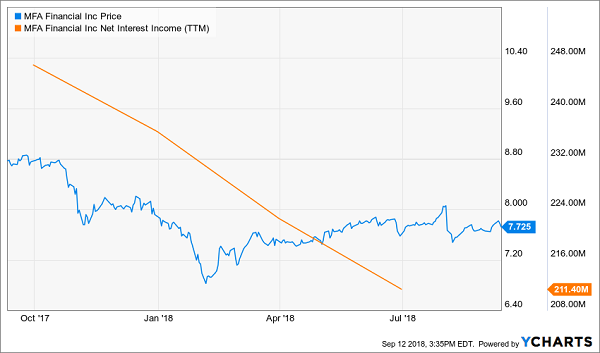 MFA Financial (MFA) is a real estate investment trust (REIT) that invests in mortgage securities. Like most others in the financial world, the company is feeling the squeeze of the flattening yield curve.

Simply put, mortgage REITs borrow at short-term interest rates and reinvest the funds into higher-yielding mortgage instruments. It’s no surprise that the Fed has been steadily increasing short-term rates, while yields on long bonds have remained stubbornly low, as far as MFA Financial is concerned.

The company earned $0.17 a share in the second quarter, aided by $0.02 of investment gains. Either way you slice it, management didn’t cover the quarterly dividend of $0.20. That’s the second time in the past four quarters MFA Financial has failed to earn enough to support the payout.

Not only is the yield curve working against the company’s favor, as evidenced by the 18% year-over-year revenue decline last quarter, but management also reported higher operating expenses in the period. In my experience, a stock that regularly under-earns its dividend will struggle to sustain the payout for more than a year.

Chasing double-digit yields is risky business. The investing graveyard is littered with dividend promises left unfulfilled when the cash was no longer flowing in to sustain these lofty payouts.

A stock like Dynagas or these two potential time bombs can spell disaster for your portfolio, especially when in or nearing retirement. Not only might you have to forego some much-needed dividend income, but you could also potentially lose your hard-earned nest egg.

Whether you’re already retired, or looking to augment your paycheck with the passive income that dividends afford, you no longer have to choose between measly 2% to 3% yields from dividend “aristocrats”, government-secured interest payments that barely keep up with inflation and dicey double-digit dividends.

Instead, Brett’s system could hand you $40,000 a year on every $500,000 invested with under-appreciated income plays like: