We have plenty of cheap dividend stocks to buy today. But which ones are really bargains—and which are cheap for a reason?

The P/E ratio won’t tip us off. We’re heading into a recession. That “E” stands for earnings. Profits can disappear quickly if we’re not careful.

Let’s look past the vanilla headline metrics and instead search where almost no one else does. Let’s have what the corporate insiders are having.

This strategy can set us up for 275% gains or more. We’ll discuss why in a moment, featuring a trio of bullish factors that are lining up for a select group of stocks.

“Skin in the Game” Aligns Management’s Goals With Ours

It only makes sense that a company with high insider ownership would hike dividends at a rapid pace: if insiders own a big slice of the company, they’re seeing their own income stream go up right alongside ours!

Consider a stock like UnitedHealth Group (UNH), which has netted a cool 74% total return for members of my Hidden Yields dividend-growth service over the last two-and-a-half years.

Talk about retiring on dividends alone! Andrew, buddy—you’re already there. With a holding—and an income stream—like that, you can bet Andrew and his team are keen to keep the dividend rising while they continue to grow the business.

(The rest of us mere mortals aim to retire on a more modest sum—say $50,000 in dividends a year on $500,000 or so invested. That’s possible with stocks that grow their payouts as fast as UNH, whose dividend is up 677% in just the last 10 years, giving investors who bought back then a gaudy 12% yield on their original buy!)

Here are two other insider faves with fast-growing payouts and rapid buybacks, too.

Life insurers like Liberty National (LNC) are smart plays on rising rates: they collect premiums and invest them in safe fixed-income securities until they pay them out (if they ever do!). In other words, increases in Treasury yields—and the 2-year rate topped 4.4% after last week’s hot inflation report—drop straight to the bottom line.

Despite that, investors have sold off LNC with everything else this year, leaving it trading at 85% of book value, or less than its assets are worth. That means we’re essentially getting LNC’s 105-year-old insurance business for free!

Meantime, the stock’s yield has nearly doubled this year, to 4%, due to the selloff (because current yields fall as share prices rise). That’s a nice place to step in, especially when you consider that LNC has hiked its dividend 275% in the last decade, generating that rich 7.6% yield on cost we discussed earlier. Heck, with LNC’s current yield at 4%, we’re already nearly halfway there.

Liberty National’s C-suite knows all of this, of course, and they’re pouncing: the percentage of LNC owned by insiders grinds higher with each passing month:

LNC Insiders Build Up Their Stake 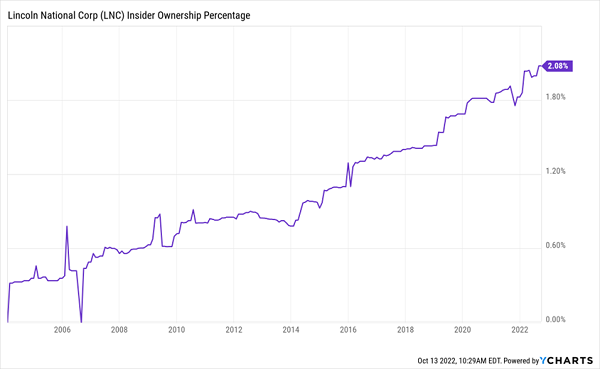 Finally, LNC is running an aggressive share-buyback plan—to the tune of 22% in the last five years alone. That helps boost per-share earnings and helps with dividend growth, because these buybacks leave the company with fewer shares on which to pay out.

The takeaway? When management is buying back shares at the corporate and personal level, it pays to take notice.

Fifth Third Bancorp (FITB) is another stock that’s seen its dividend yield jump this year—and insider buying along with it.

The 4% yield is mainly up because the shares have tracked the broader market lower. That’s left the regional bank trading at just 9-times forward earnings, far below its five-year average of 10.7.

That deal is available even though banks are enjoying far higher interest income than they were a year ago, due to Fed rate hikes. In the second quarter, for example, Fifth-Third’s net interest income jumped 11%. Nonperforming loans made up just 0.47% of its loan book.

Those are strong numbers for the regional bank, whose branches dot the Midwest and South—and insiders are jumping on the obvious disconnect between the bank’s valuation and its performance, grabbing around 990,000 shares year to date.

In all, insiders own about 9 million shares in the company, good for a 1.3% stake. That may not sound like much, but as with LNC, that share has been growing quickly: 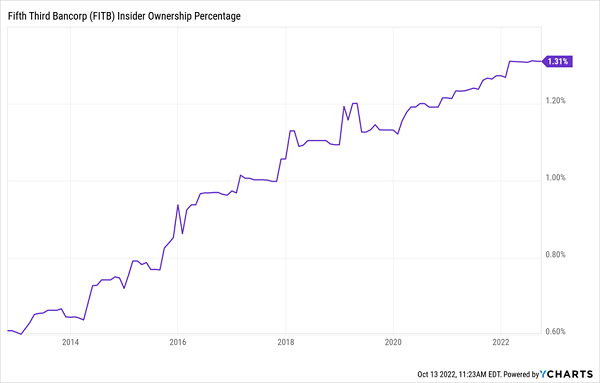 The C-suite is also taking shares off the market through share buybacks, though at a more modest pace than LNC. Nonetheless, as you can see below, they’ve nicely timed the company’s repurchases to take advantage of the weakness we’ve seen in the last couple of years—a good sign of a team that knows when to buy:

Insiders and the Company Buy Stock in the Downturn 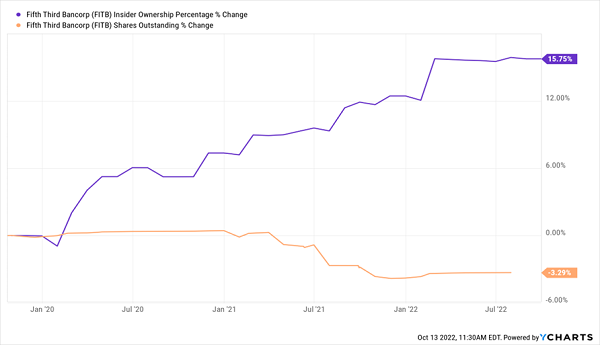 The best part? As with LNC, we’re getting solid dividend growth here, which would increase our 4.1% current yield in short order. In the last year, the dividend has tripled, and it still accounts for just 38% of earnings, well below my “safety line” of 50%.

Finally, in a fast-changing economy like this, with high rates now and a recession on the horizon, we want to own regional banks like Fifth Third, which can more easily change tack than big players like JPMorgan Chase & Co. (JPM) and Wells Fargo (WFC). The fact that management has its own personal cash on the line gives us more confidence they’ll make the right moves.

Look, you and I both know a recession is on the way. With the Fed hiking rates as fast as it is, based on lagging indicators like employment and the consumer-price index, it’s obvious they’ll overshoot.

Just look back through history. It’s happened over and over (and over!) again. This time’s no different.

So what are we investors to do?

Simple: buy the 7 “recession-resistant” stocks I’ll tell you about right here. These 7 stout companies boast share prices that are all cheaper than the market, giving us an extra layer of safety. AND all 7 are growing dividends fast—which helps drive up their prices as investors take notice and buy in.

In short, I expect these 7 “dividend lifeboats” to generate 15%+ annualized total returns for us for years to come—and NOW is the time to buy them.

Don’t miss out on this opportunity to collect safe—and growing—payouts. Click here and I’ll reveal our dividend-driven plan to survive (and thrive!) no matter what comes our way in 2023. I’ll also give you the names, tickers and my complete research on these 7 stout dividend growers in an exclusive Investor Report.